Samuel Benjamin Vierling, apothecary, physician, and surgeon, was born in Rudelstaedt, Silesia. His parents, George Ernest and Maria Rosina Klein Vierling, were devout Lutherans who, having baptized their son in infancy, instilled in him the Christian precept of doing good unto one's fellow man. Heeding his father's advice, Samuel Benjamin decided that a medical career would enable him to realize his father's highest ambition for his son—administering to the needs of the physically distressed. While studying medicine at the University of Berlin, Benjamin associated with the Brethren of the Unitas Fratrum (Moravian church) and wrote to the Unity Elders Conference for permission to serve in one of the German congregations. Instead, he was called in 1789 to be the physician of the Moravians who, in 1766, had established the town of Salem, N.C., in the frontier of America. 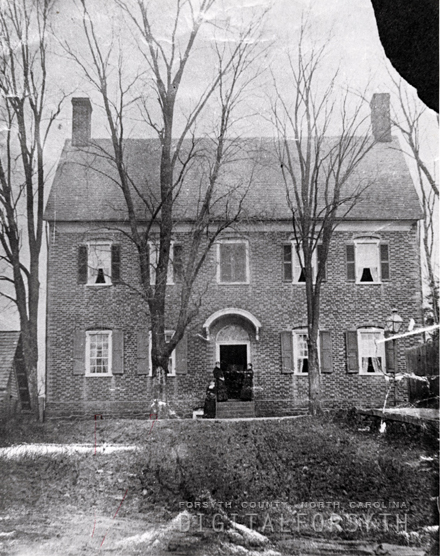 Having bade farewell to his family, whom he would never again see on earth, he commended his life to the guidance of God, and on 27 Sept. 1789 he was joyfully received into the Moravian church by the congregation at Zeist, Holland. On 15 October, with other Moravians destined for America, he sailed from Amsterdam, safely landing in New York on 26 December. After spending a few days in the Moravian settlement at Bethlehem, Pa., he proceeded to Salem, where he arrived on 22 Feb. 1790 at age twenty-five. On the first day of his residence in the town, his knowledge of obstetrics enabled him to save the life of Magdelena Kraus.

As an apothecary, Vierling maintained an herb garden and dispensed his drugs with discretion. During an epidemic of scarlet fever, he abated the pestilence by prescribing less strong medicine and more fresh air. Smallpox, another disease that occasionally reached epidemic proportions, taxed his resources as a physician. In 1805, seven years after Edward Jenner had perfected his cowpox vaccine, Vierling successfully vaccinated more than two hundred persons throughout Salem and its environs.

The Salem Board Minutes and the Salem Diaries are interspersed with entries attesting to Vierling's renown as a surgeon in North Carolina and the adjoining states of Virginia and South Carolina. Supplications to Christ, the Great Physician, always preceded and accompanied his major operations. In his memoir, it is written of Vierling: "He did not depend upon his knowledge and skill alone, but trusted in the help and blessing of God, and often prayed to Him concerning the serious cases which frequently came into his hands."

Vierling also sang in the church choir and played the violin. He was a member of the Aufseher Collegium (the governing board) and the Music Committee in Salem, but he declined appointment (by the General Assembly) as a justice of the peace, an office that he believed would interfere with the demands of his medical practice.

In accordance with the "omniscient wisdom of the Lord," as divined through the Moravian custom of submitting the question of marriage determination to the Lot, Vierling married the Single Sister Anna Elisabeth Bagge on 19 Mar. 1790. They had one daughter, Maria Rosina. To Vierling's deep sorrow, his wife died on 14 Mar. 1792 during a scarlet fever epidemic. On 28 July Vierling, left with the responsibility of caring for a six-month-old daughter, proposed the name of Martha Elisabeth Miksch (the step-granddaughter of Bishop Augustus Gottlieb Spangenberg and the daughter of the proprietor of the Miksch Tobacco Shop) to the members of the Elders Conference as his second wife. The decision of the Lot was affirmative, and on 5 August Vierling married her. The couple had three sons—August Ernst, Friedrich Benjamin, and Theophilus—and five daughters—Henriette Friederika, Carolina Juliana, Johanna Eleonora, Theodora Amalia, and Eliza Wilhemina.

Five of Vierling's children by his second marriage were born in the imposing home on 463 South Church Street, built in 1802; it was large enough to accommodate not only his large family but also his medical practice. At the rear of the house was a stable, against which leaned a high pile of cordwood. One day his youngest daughter, who had been playing nearby, suddenly ran to the house to tell her mother that she had seen an angel on the woodpile. The mother hurriedly accompanied Eliza Wilhemina to discover what had excited her daughter. As Mrs. Vierling approached the backdoor of the house, she was astonished to see the tremendous pile of wood tumble down on the ground where Eliza had been playing. Who would doubt that the child had experienced the special protection of the Lord and had seen her Guardian Angel?

During the summer of 1817, while battling an epidemic of typhoid in Salem, Vierling was stricken with the fever. The remedies used for his relief had some effect, but during the ensuing months, the fever returned intermittently. Enfeebled by the disease, he was served Holy Communion in his home during the Moravian Festival of 13 August. He died three months later surrounded by his family and members of the congregation, who sang Moravian hymns.

Bricker, Alice H averstick. 1898. An examination of the records of the Aufseher Collegium of the community at Lititz, Pennsylvania, from 1802 to 1844. https://www.worldcat.org/title/examination-of-the-records-of-the-aufseher-collegium-of-the-community-at-lititz-pennsylvania-from-1802-to-1844/oclc/225873353 (accessed June 25, 2014).