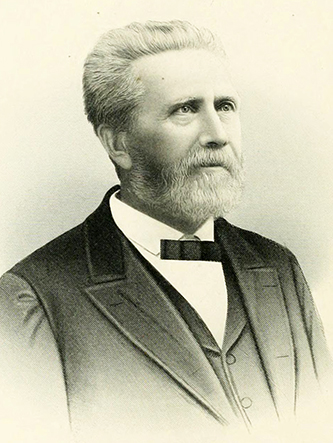 William Worrell Vass, Sr., railroad executive, was born near Oxford in Granville County, the son of Thomas, Jr., a planter, and Lucy Hester Vass. The family of Thomas Vass, Sr., a Baptist minister and descendant of French Huguenots, had moved to North Carolina from Virginia in 1790.

Young Vass was educated in the common schools. While still in his teens, he clerked in the mercantile store of Major John S. Eaton at Henderson and became Eaton's full partner in 1843. Eaton, who retired from the business two years later, was a director of the Raleigh and Gaston Railroad, chartered in 1835. He secured Vass an appointment as treasurer of the railroad on 1 Jan. 1845. Because of the bankrupt condition of the line, the state bought it in 1848 and appointed Vass president. Vass proved to be an excellent administrator, and in 1851, when the line was again profitable, he returned to his duties as treasurer.

In October 1862 Vass was elected treasurer of the Chatham Railroad Company, later the Raleigh and Augusta Airline Railway Company. He maintained his appointment as treasurer of the Raleigh and Gaston, which consolidated with Seaboard Airline in 1893 and moved its headquarters to Norfolk, Va. On his resignation as treasurer owing to advanced age and ill health, he was appointed honorary secretary of the new consolidated railroad. By 1896 he had achieved the distinction of being perhaps the longest continuously serving railroad official in the United States.

Vass also served as a Confederate major, a director of the Raleigh Institute for the Deaf, Dumb, and Blind, and a trustee of Wake Forest College. He was an active member of the First Baptist Church of Raleigh for forty-nine years.

Vass's first wife, Amanda Freeman of Granville County, died without issue. Vass then married Lillias (Lillie) Margaret McDaniel, daughter of the Reverend James McDaniel of Fayetteville, on 11 Oct. 1866. Vass and his second wife had three children: Eleanor, Lilla May, and William W., Jr., who became a prominent banker. Vass died in Raleigh and was buried in Oakwood Cemetery.

Moses N. Amis, Historical Raleigh from Its Foundation in 1792, with Sketches of Wake County and Its Important Towns (1913).

Minutes of the Sixty-seventh Annual Meeting of the Baptist State Convention of North Carolina (1897).