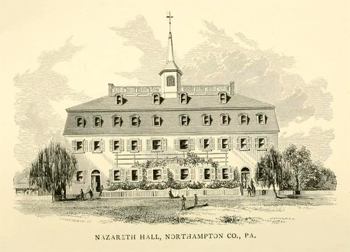 Jacob Van Vleck, Moravian bishop, was born in New York City, the third oldest of seven children. His father, Henricus (Henry) Van Vleck, was a merchant and realtor in New York City; his mother, Jannetje Cargyle Van Vleck, was from Isle, Scotland. Van Vleck obtained his early education at Nazareth, Pa, and attended the theological seminary at Barby, Saxony, between 1771 and 1779. At this time he sought experience at the Single Brothers House in Christiansbrunn, Pa. His abilities were recognized, and by 1781 he was appointed chaplain and superintendent of the Brothers House at Bethlehem, Pa. Here he became secretary of the General Board.

Perhaps in appreciation for the Moravians allowing the Brothers House to be used as a hospital on two occasions during the American Revolution, George Washington in 1782 visited Bethlehem, where he was entertained by sacred music, vocal and instrumental. Jacob Van Vleck played the organ in the chapel while cake and wine were served. Van Vleck had a fondness for music and was a pianist, organist, and violinist, as well as a composer. The music he wrote was in the classical tradition. His father's admiration for him was evidenced in his will in 1784; it stated, "And unto my dear Son, Jacob, I give my Silver pocket watch which I leave him in Remembrance of His Father who ever had singular joy in his said son's Spiritual prosperity."

In 1789, while a delegate to the synod in Herrnhut, Van Vleck married Ann Elizabeth Staehle (Lisetta Stackly), from Bern, Switzerland, and of Moravian parentage, who was teaching in Herrnhut. They had two children, William Henry (15 Nov. 1790–19 Jan. 1853) and Charles Anthony (4 Nov. 1794–21 Dec. 1845). Both sons entered the ministry, and Charles Anthony served as bishop in Salem. In 1881 Jacob's grandson, Henry Jacob Van Vleck, was also consecrated a bishop.

On returning to America Van Vleck became principal of the Young Ladies' Seminary, in Bethlehem, which had approximately 80 students enrolled. By 1797 the boarding school had 365 students, including the niece of George Washington and the children of other prominent families. New applications were not even considered. Van Vleck remained in his post until 1800. Two years later he was appointed principal of the boys' school, Nazareth Hall. He had become the head pastor at Bethlehem in 1799.

In 1811 he was transferred to Lititz, Pa., and in 1812 he was sent to Salem, N.C. Arriving in Salem on 14 November, he and his wife resided at the Gemein Haus. One of three administrators for the Southern Province in the Provincial Helpers Conference (later known as the Provincial Elders Conference), Van Vleck became chairman of this group by 16 November. Also beginning in 1812 he served as pastor of the Salem congregation, preaching in German and English and leading song services (singstunden ).

Van Vleck traveled to Bethlehem, Pa., where on 2 May 1815 he was consecrated bishop, thus becoming the first American-born Moravian bishop. In 1816 he was listed as a member of the North Carolina Bible Society, a statewide religious organization. In 1822 his wife was elected by the fifty-six charter members as president of the Female Missionary Society. Later that year Van Vleck asked to be relieved of his duties at Salem, and after ten years' residence there he and his wife returned to Bethlehem. She died on 24 Nov. 1829. Jacob Van Vleck died at age eighty and was buried in the married men's section of the Moravian cemetery in Bethlehem. A photograph of his portrait is in the Old Salem research files, Winston-Salem.

J. Taylor Hamilton, A History of the Church Known as the Moravian Church (1900).

William C. Reichel, History of the Rise, Programs, and Present Conditions of the Bethlehem Female Seminary with a Catalogue of Its Pupils, 1785–1858 (1858).

Reichel, William Cornelius. Historical sketch of Nazareth Hall from 1755 to 1869; with an account of the reunions of former pupils and of the inauguration of a monument at Nazareth on the 11th of June, 1868, erected in memory of alumni who fell in the late rebellion. Philadelphia: Printed for the Reunion Society of Nazareth Hall by J.B. Lippincott. 1869. https://archive.org/details/historicalsketch00reic (accessed March 24, 2014).

Reichel, William Cornelius. Historical sketch of Nazareth Hall from 1755 to 1869; with an account of the reunions of former pupils and of the inauguration of a monument at Nazareth on the 11th of June, 1868, erected in memory of alumni who fell in the late rebellion. Philadelphia: Printed for the Reunion Society of Nazareth Hall by J.B. Lippincott. 1869. https://archive.org/details/historicalsketch00reic (accessed March 24, 2014).