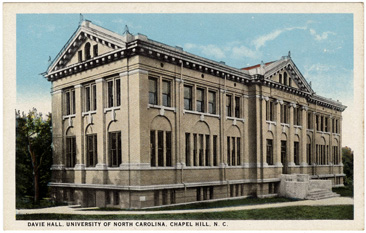 Norman Underwood, building contractor, was born in Youngstown, Ohio, of English and Irish ancestry. His parents were Mary Jones and Wright A. Underwood. After attending the public schools of Wood County, Ohio, he moved to Knoxville, Tenn., where he worked in construction for approximately fourteen years. He then became the general superintendent for the contracting firm of D. Getoz in Durham, N.C., between 1897 and 1899. Moving to the Golden Belt Manufacturing Company, he was superintendent of construction until 1901, when he began his own firm in Durham. T. Yancey Milburn, a noted architect, stated that Underwood was "the principal builder in this area at one time" and described Underwood's work for him as "excellent." Underwood constructed buildings on three college campuses. At Trinity College they included Craven Memorial Hall (1898), the library (1902), Alspaugh Hall (1902), and West Duke Building—also called the Academic Building—(1911), and at The University of North Carolina, Howell Hall (1906), the president's home (1907), Davie Hall (1908), and Peabody Hall (1912). The president's home on East Franklin Street in Chapel Hill was a copy of the North Carolina Building at the Jamestown Exposition of 1907. When the decision was reached to dismantle some buildings at Trinity College and reconstruct them on the campus of Kittrell College, the materials were moved by rail to Kittrell, where students were hired and assistance was given by a black licensed architect. 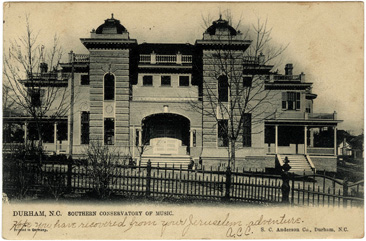 Construction in Durham by Underwood's firm included the U.S. Post Office—also called the Federal building—(1906) (site of the Hill building), the Trust building (1905), Durham Public Library (1921), the Southern Conservatory of Music, the Academy of Music (reportedly the largest stage south of Baltimore), the Underwood building, the Temple building (1904), Duke Memorial Methodist Church (1907–14), Watts Hospital (the two buildings with stucco exterior on the east side), and the Public Service Company building (formerly the Durham Sun building). His firm constructed near Van Straaten's the five-storied B. N. Duke building, which burned soon after completion. The Trust building, erected for the Durham Bank and Trust Company, was the first in that area of the state to use reinforced concrete and at the time of its construction was reported to be the tallest building in North Carolina. Underwood built several fine homes in Durham including that of J. E. Stagg (1911), J. M. Morehead, H. A. Foushee, B. N. Duke (Four Acres, 1910), and Victor S. Bryant (1924).

Active in civic affairs, Underwood was a member of the Durham Board of Aldermen and served as the police and fire commissioner. At the time of his death he sat on the city board of adjustments, whose five members worked with the city building inspector. In addition, he was a trustee of the Southern Conservatory of Music and a member of the board of directors of Durham Iron Works. When Underwood was elected the first president of the Carolinas Branch of the Associated General Contractors of America in 1922, the thirty-five charter members included such prominent contractors as George W. Kane and Nello L. Teer. Previously he had served as president of the Builders Exchange of North Carolina. He was a charter member of the Durham Rotary Club (1915) and belonged to the Knights of Pythias and the Independent Order of Odd Fellows. When the Hope Valley Country Club was organized in 1927, Underwood was among the charter members. At the huge Duke Memorial Methodist Church, which his firm built, Underwood was a trustee and a member of the Board of Stewards.

He married Elsie E. Ward in Bowling Green, Ohio, on 6 Mar. 1882. His home was located at the present site of University Apartments on Duke University Road, then known as Rigsbee Road. Underwood Avenue in this area was named for him.

Underwood died at Watts Hospital at age sixty-seven. He was survived by his widow, his daughter May Almina Underwood Rigsbee, and sons Norman Bruce, Harrison Aubrey, and Robert Ward. Another son, Daniel Maurice, had died in 1921 after an elevator shaft accident. Norman Underwood's funeral was held at his home by the pastor and former pastor of Duke Memorial Methodist Church. He was buried in Maplewood Cemetery, Durham, at the end of the main entrance road. There was a portrait of him but its location is unknown.