by Erin Lawrimore, 2015
Reprinted with permission. 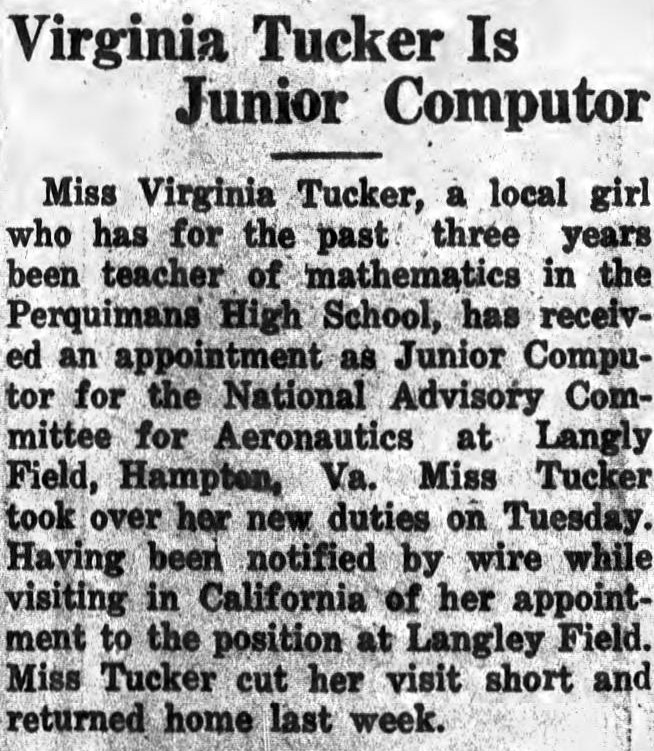 Virginia Layden "Ginna" Tucker was born in Hertford in 1909. She was the valedictorian of Perquimans High School's first graduating class in 1926 and an alumna of the North Carolina College for Women -- now known as the University of North Carolina at Greensboro -- whose pioneering work in aeronautics and mechanical engineering paved a path for women in STEM fields. Through her work for the National Advisory Committee for Aeronautics (NACA, now NASA) to her research at Northrop Aviation Corporation to her involvement with the Society of Women Engineers, Tucker used her NCCW education to become a trailblazer in aviation research.

Tucker arrived on the NCCW campus in the Fall of 1926, and quickly established herself as a leader among her peers. In her senior year, she served as president of the Adelphian Literary Society as well as the "college fire chief." As college fire chief, she organized a fire drill in Spencer dormitory in April 1930 that garnered praise from Chief F. D. Shaw of the the Greensboro Fire Department, who specifically congratulated Tucker on "the conduct of the students" and their "good training." Two months later in June 1930, she graduated from NCCW with a B.A. in mathematics and a minor in education.

After graduation, she worked as a high school mathematics teacher in her hometown of Hertford, NC. She also took the Civil Service exam in hopes of applying for a job with the federal government. After four years of teaching, she earned an appointment at the Langley Memorial Aeronautical Laboratory (now Langley Research Center) in Virginia. Langley was the main research center for the National Advisory Committee for Aeronautics (NACA), the precursor of the National Aeronautics and Space Administration (NASA).

Tucker was one of five women who began work in September 1935 as Langley's first "Computer Pool." NACA did not have modern electrical computers, but instead relied on the work of "human computers," a pool of female mathematicians. These women were tasked with processing the huge amounts of data coming in from wind tunnel and flight tests. Using slide rules, charts, and her deep mathematical knowledge, Tucker and the other "human computers" performed intricate calculations that enabled NACA engineers to design and perfect airplanes.

While only 25 women were on the large staff at Langley when Tucker arrived in 1935, the number expanded during World War II. Tucker herself helped recruit many of the women who became human computers, traveling to universities and women's colleges across the South. After a recruiting trip to the Woman's College, she wrote to the Alumnae Association "that graduates from Woman's College are definitely outstanding women." By 1946, Tucker had advanced to the position of Overall Supervisor for Computing at Langley, and she was tasked with managing a department of over 400 women in computing sections across the laboratory facility.

After 12 years with NACA, Tucker left civil service for a position as an aerodynamicist at Northrop Corporation in Hawthorne, CA, one of the United States' leading aviation companies. Specifically, Tucker's engineering research focused on boundary layers (the very thin layer of air flowing over the surface of an aircraft wing) and increased aircraft efficiency. She wrote to the Woman's College Alumae Office in 1954 that "my work is most interesting and I am privileged to be working with a group of specialists, many of whom have emigrated here from Austria, Switzerland, France, and Germany, since 1945."

In addition to her work at Northrop, Tucker was a leader in advocating for women in the engineering fields. She was elected director of the Los Angeles Section of the Society of Women Engineers (SWE) in 1955. She chaired SWE's National Finance Committee from 1955-1956. And, in 1957, she served as SWE's representative to the Los Angeles Technical Societies Council. In October 1957, she was invited to a be principal speaker in a panel discussion on "The Woman Engineer in Modern Industrial Society" at UCLA.

In 1965 after 17 years as an engineer at Northrop, Tucker returned home to Hertford, NC, to serve as Supervisor of Instruction and Evaluation in Perquimans County. She held this position until her retirement in 1974. Tucker passed away on January 19, 1985, at the age of 75.