William Trousdale, soldier, statesman, and ambassador, was born in Orange County, the son of James and Elizabeth Dobbins Trousdale. James Trousdale had commanded a company of North Carolina Patriots in the American Revolution. In return for his services, the state of North Carolina granted him 640 acres of land in the Tennessee Territory, where he moved his family, including young William, in 1796.

Trousdale grew up accustomed to the deprivations and wilds of frontier life. The educational advantages available to him were very limited, but with the influx of civilization there came improved facilities. Over the years he received instruction from the Reverend Gideon Blackburn and later John Hall, both fine scholars of that area and time. In 1813, while Trousdale was a pupil under Dr. Blackburn, the Creek Indians began hostilities in Tennessee. Trousdale entered Captain William Edward's company of mounted riflemen and was soon elected a third lieutenant. He fought under General John Coffee in the Battle of Tallashatchee and a short time later served under General Andrew Jackson at the Battle of Talledega, where he gained notice for his daring and bravery. 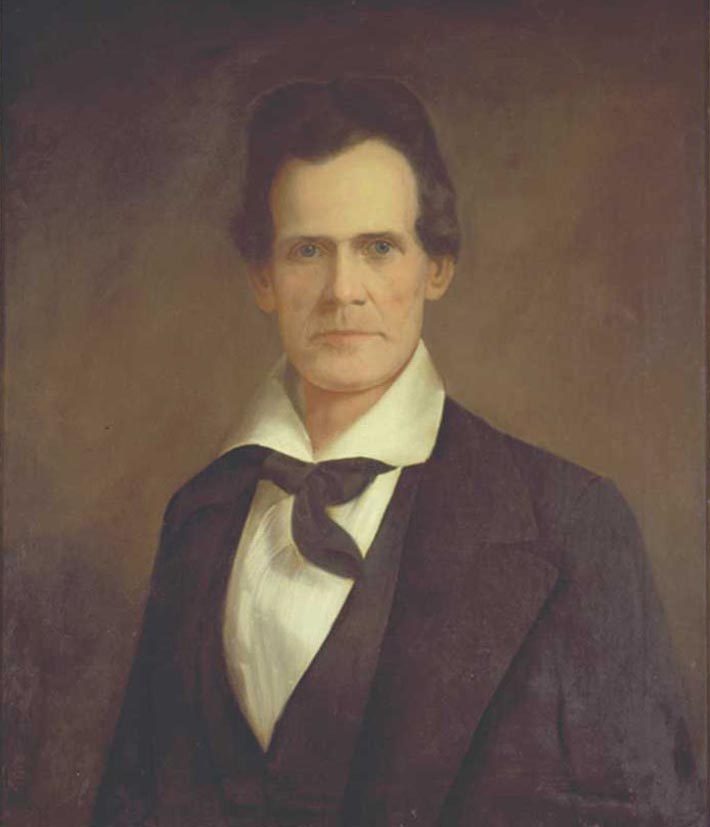 When the Creek War was over, Trousdale returned home briefly, only to reenter service in 1814 following the burning of Washington, D.C., by the British. He enrolled in George Elliott's company of Tennessee volunteers and served as a private throughout his enlistment despite numerous offers of a staff position. His company was part of General Jackson's army that surrounded the Spanish fort at Pensacola, Fla., on 6 Nov. 1814. Trousdale was directly responsible for the recruiting of volunteers requested by Jackson to storm the fort. Fortunately this action was unnecessary, as the fort surrendered prior to the hour of battle. The army was then moved to New Orleans to prevent the city's capture by the British. On 23 Dec. 1814 Coffee's brigade came into contact with the British force, and the company in which Trousdale served was credited with the capture of a number of British officers and troops. Trousdale also participated in the battles of 27 Dec. 1814 and 1 and 8 Jan. 1815. At the end of the conflict he returned to Tennessee to finish his studies under John Hall. He later read law and in 1820 was admitted to the bar.

In 1836 Trousdale volunteered his services in the quelling of the Indian uprising in Florida. At the command of a Tennessee regiment with the rank of colonel, he proceeded to Florida and participated in two set battles and several skirmishes. In these actions he distinguished himself by his fearlessness. Jackson offered him an appointment as brigadier general in the U.S. Army following the end of hostilities, but Trousdale declined, stating that he desired no connection with the army except in times of war.

In 1847, with the Mexican War pending, President James K. Polk commissioned Trousdale a colonel of infantry and assigned him to General Winfield Scott's army. Landing in Mexico on 13 June 1847 after the outbreak of the war, Trousdale engaged the enemy at the Battle of Contreras on 19 July 1847. However, he became most noted for his actions in the Battle of Molino del Rey on 8–13 September. On the twelfth of September his regiment bore the brunt of the Mexican attack and repulsed the enemy. Although Colonel Trousdale was badly wounded with his right arm shattered by two rifle balls, he maintained his position with great firmness, repulsed an enemy assault, stormed an enemy battery, and turned the guns on its retreating defenders. This decisive action virtually ended the Mexican War. Trousdale returned to private life, but on 23 Aug. 1848, "for gallant and meritorious conduct," he was made a brigadier general by brevet in the U.S. Army on the appointment of President Polk. In 1849 General Trousdale, after losing in congressional elections in earlier years, was nominated by the Democrats for the governorship of Tennessee. He won this post but was defeated for reelection by a small margin in 1851. On 24 May 1853 President Franklin Pierce appointed him to the prestigious post of ambassador to Brazil. During the four years he served, he induced the Brazilian government to open up the Amazon River to commerce and extended the friendly relations between that country and the United States. At the termination of this service, Trousdale retired and began to nurse a rheumatic affliction that had long caused him pain. During the Civil War he cast his sympathies with those of his state but was unable to serve the Confederate cause due to physical decrepitude.

In March 1872 Trousdale contracted pneumonia, which impaired his health and his physical powers. His death at age eighty-three was mourned by the entire state. In 1827 he had married Mary Ann Bugg, who bore him seven children: Maria Louisa, Caroline Valeria, Belvederia Adelaid, Ophelia Alice, Charles William, Julius Augustus, and Frances Elizabeth.

Tennessee, and William Trousdale. 1851. The Governor's message, delivered before the House of Representatives of the State of Tennessee, October 8th, 1851. S.I: s.n. https://www.worldcat.org/title/governors-message-delivered-before-the-house-of-representatives-of-the-state-of-tennessee-october-8th-1851/oclc/010478805 (accessed July 9, 2014).