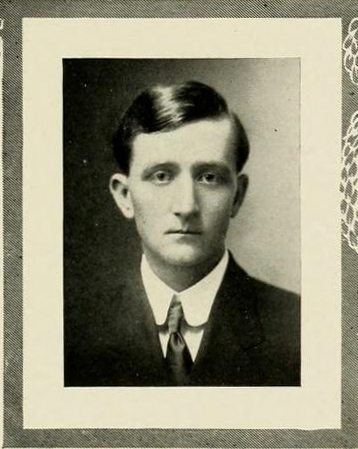 Henry Roland Totten, botanist and professor, was born in Matthews, the son of William Theophilus and Jeannette Frances Barham Totten. He attended the Yadkin Collegiate Institute and in 1913 was graduated from The University of North Carolina, from which he also received the M.A. (1914) and Ph.D. (1923) degrees. His graduate work was under the direction of Professor W. C. Coker. Totten was an instructor in botany in Chapel Hill between 1914 and 1917. Following enlistment in the Reserve Officer Training Corps in World War I, he was commissioned second lieutenant (1917), was stationed at Camp Jackson, S.C., with the field artillery (1917–18), and served in France (1918–19). He was a graduate student at the University of Paris in 1919. Totten retained his army reserve commission; he entered World War II as a captain and rose to lieutenant colonel. Returning to his post as instructor in botany in 1919, he became assistant professor (1923–25), associate professor (1925–29), and professor (1929–63). He retired in 1963.

A dedicated teacher of general botany, pharmacognosy, dendrology, and taxonomy, Professor Totten helped train two generations of pharmacists. His research interests were in the fungi, ferns, and vascular flora, while his primary interest was in the taxonomy of the woody plants of the southeastern United States. His outstanding publications include Trees of the Southeastern States

(1916, 1937) with W. C. Coker and "Fagacease" for the Manual of the Vascular Flora of the Carolinas (1968). A member of many professional organizations, he was particularly active in the Elisha Mitchell Scientific Society, North Carolina Academy of Science, Association of Southeastern Biologists, and Southern Appalachian Botanical Club. A leader in wildflower preservation, he also was influential in the establishment of garden clubs in North Carolina.

After the retirement of W. C. Coker, Totten became director of the arboretum on the university campus, and it was his interest and  efforts that helped procure the site of the North Carolina Botanical Garden in Chapel  Hill. He won numerous awards for teaching and for distinguished contributions to the  training of pharmacists and received an honorary doctorate of laws from Atlantic Christian College. His greatest pleasure, however, resulted from the naming of an oak in his honor, Quercus totteni, by Lionel Melvin. He also was noted for his fondness in roaming the fields and woods with his students, friends, and his dogs.

A Methodist, he was married in 1923 to Addie Williams, who joined him in his work, particularly with garden clubs.

The Yackety Yack, Vol. 13.  Chapel Hill, [N.C.]: The Dialetic and Philanthropic Literary Societies and the Fraternities of the University of North Carolina. 1913. http://library.digitalnc.org/cdm/singleitem/collection/yearbooks/id/856/rec/1 (accessed January 16, 2014).