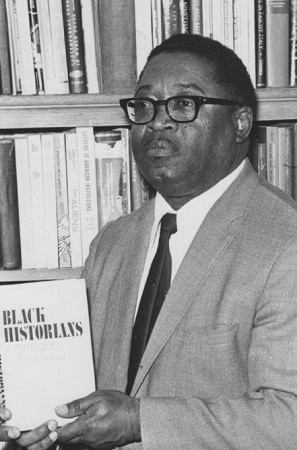 Earlie Endris Thorpe, historian and college professor, was born in Durham, the son of Eural Endris and Vina Dean Thorpe. He served in the U.S. Army in the European theater (1944–46) and in 1948 was graduated from North Carolina College, in Durham, from which he received a master's degree the next year. In 1953 he was awarded the Ph.D. degree by Ohio State University; his dissertation was entitled "Negro Historiography in the United States."

Thorpe taught at Stowe Teachers College, St. Louis, Mo. (1951–52), Alabama A. and M. College, Normal (1952–55), and Southern University, Baton Rouge, La. (1955–62). In 1962 he returned to his alma mater, by then North Carolina Central University">North Carolina Central University, where he spent the remainder of his career as chairman of the Department of History and Social Science. He was visiting professor of history at Duke University in 1969–70 and of Afro-American Studies at Harvard University in 1971. Thorpe was the author of Negro Historians in the United States (1958), The Desertion of Man: A Critique of Philosophy of History (1958), The Mind of the Negro: An Intellectual History of Afro-Americans (1961), Eros and Freedom in Southern Life and Thought (1967), The Central Theme of Black History (1969), The Old South: A Psychohistory (1972), African Americans and the Sacred: Spirituals, Slave Religion, and Symbolism (1982), Slave Religion, Spirituals, and C. J. Jung (1983), and A Concise History of North Carolina Central University (1984). He also was editor of the ten-booklet series "The Black Experience in America." Thorpe married Martha Vivian Branch, and they had two daughters, Rita Harrington and Gloria Earl.

"Historical News and Notices," Journal of Southern History 55 (May 1989)