Jacob Thompson, Mississippi congressman, secretary of the interior, and Confederate agent in Canada, was born in Leasburg, Caswell County, one of nine children of Nicholas and Lucretia Van Hook Thompson. His father's tanning business and his mother's estate had placed the family in comfortable circumstances, and it was the hope of Jacob's parents that he would enter the ministry, a vocation for which he had no ambition. Graduating in 1831 from The University of North Carolina, he remained at Chapel Hill as a postgraduate tutor. Eighteen months later he resigned in order to read law in the Greensboro office of Judge John M. Dick. On his admission to the bar in 1835, Thompson, concluding that the best opportunity for a young attorney lay on the frontier, decided to relocate in Mississippi; all but one of his eight siblings eventually moved to that state. 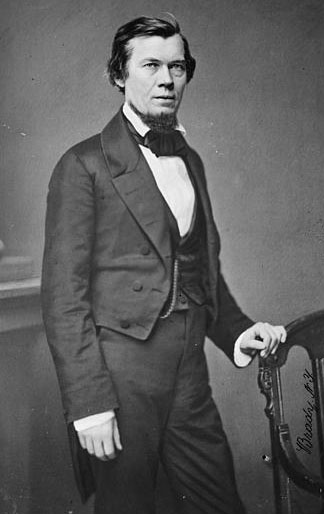 A chance encounter with his older brother, Young, at Columbus, Miss., persuaded Jacob to establish himself at Pontotoc in the area newly ceded by the Chickasaws in the Jackson Indian removal program. He quickly prospered, although at first his legal practice was devoted mostly to conveyances. In addition to his main career, Thompson acquired within a few years three substantial plantations. Making his home in Oxford after his initial period in Mississippi, he became a pillar of the local Episcopal church and a benefactor of the state university. In 1840 he married Catharine Jones, the daughter of a wealthy planter. Because of her very tender age she was sent to France to complete her education, but on her return she blossomed into an outstanding social figure; the couple had one son, Caswell Macon.

Thompson launched his political career shortly after reaching Mississippi. He established a public reputation by vigorously opposing state endorsement of $5 million in Union Bank bonds, a position that proved to be sound when the institution subsequently defaulted; he later urged the state to repudiate the obligation. Narrowly defeated for attorney general in 1837, just two years after his arrival, he was elected as a Democrat to Congress in 1839, a victory that began for Thompson six consecutive House terms concluded in 1851, when he was turned out by a strong Whig tide in Mississippi. From 1845 on he was influential in the House by virtue of his successive chairmanships of the Public Lands and Indian Affairs committees, assignments that furnished valuable experience for a future secretary of the interior.

Thompson's first significant impact on national politics came in 1844, when he backed the efforts of Robert J. Walker and others to deny the Democratic nomination to the antiexpansionist former president, Martin Van Buren. On the election of James K. Polk, Thompson was instrumental in persuading the new president to name Walker to head the Treasury Department. But Thompson's friendship for Walker foundered when he discovered that his fellow Mississippian had withheld from him an interim gubernatorial appointment to Walker's old Senate seat. The rupture between the two men was never healed, and Thompson became increasingly identified with the Democrats' proslavery wing; he opposed the Henry Clay compromise proposals of 1850 despite substantial Mississippi support for them. Ironically, late in life Thompson came to regret that he had helped thwart Clay's 1844 bid for the presidency.

After leaving the House of Representatives, he declined President Franklin Pierce's offer of the Havana consulate, which was then considered to be a political prize. In 1856 he stood aside from a Senate race so that Jefferson Davis might win the seat. The following year he was given the Interior Department by President James Buchanan. From the first Thompson was a strong figure in a decidedly prosouthern cabinet; he vigorously asserted his authority over the hitherto largely autonomous bureaus of his own department. Unfortunately, however, his stewardship was clouded in 1860–61 by the discovery that a subordinate clerk, Goddard Bailey, had exchanged $557,000 in Indian Trust Fund bonds for worthless drafts of the Russell, Majors, and Waddell Company on the War Department. Secretary of War John B. Floyd was disgraced by the scandal—Bailey was a relative who had tried to help Floyd escape the consequences of his misplaced faith in Russell, Majors, and Waddell—but a five-member special House committee absolved Thompson of any responsibility. It was for other reasons that Thompson left the administration at the beginning of 1861. 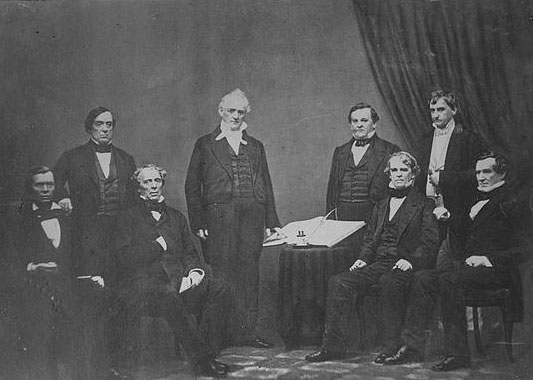 As a states' rights man he had indicated at the outset of the secession crisis that he would stand by Mississippi, but he tried to exert influence within the national government for as long as possible. It was President Buchanan's decision to dispatch the Star of the West to Charleston, S.C., without Thompson's foreknowledge, which persuaded the latter to withdraw.

Back in Mississippi Thompson made a desultory, and unsuccessful, race for governor before undertaking military service in several different capacities. His army career ended when, as inspector under Lieutenant General John C. Pemberton, he was captured at Vicksburg and paroled. Elected to the Mississippi legislature in the fall of 1863, Thompson was summoned to Richmond by Confederate president Jefferson Davis early the next year. Sent to Canada, Thompson spent the last year of the war vainly attempting—with or without copperhead support—to arrange mass Confederate escapes from prisoner-of-war camps in the Great Lakes area. He steadfastly disavowed any complicity in plots to burn Northern cities and maintained that the 1864 raid on St. Albans, Vt., was carried out against his orders. At the close of the war he and other Confederate leaders were charged with coconspiracy in the Lincoln assassination, and a $25,000 reward was posted for his capture. Consequently Thompson and his wife passed several years in England before it was safe for them to return first to Oxford, where their home had been destroyed in the war, and shortly thereafter to Memphis, Tenn.

In the 1870s Thompson came again to public notice when the scandal-beset Grant administration sued him for $2 million to recover the Floyd-Bailey losses. Clearly a partisan effort to divert attention from the War Department's Belknap scandals, the suit was quietly dropped after the 1876 election. However, the sources of the Thompsons' affluent postwar lifestyle have yet to be explained fully. Had he indeed invested his wife's dowry—"a trunk full of gold" according to family tradition—in English securities, or had he embezzled vast Confederate funds entrusted to him in Canada as charged by William C. Davis?

An ambitious, calculating man of ability, Jacob Thompson remains strikingly obscure considering his antebellum political prominence in both Mississippi and Washington. On his death in Memphis he left behind remarkably little material on which to base a definitive study of his career.