Perley Albert Thomas, High Point industrialist, was born in the London area of Ontario, Canada, the son of Margaret Cunningham and John Andrew Thomas. His father was a carpenter and farmer. Young Thomas received an elementary school education, which he supplemented with correspondence courses. Always an imaginative, practical draftsman-engineer, he learned the manufacture of streetcars in Detroit and later became chief engineer of the Kuhlman Car Company of Cleveland, Ohio. In 1909 he moved to High Point as chief engineer of the Southern Car Company.

After the company closed in 1914, P.A. Thomas began to produce replacement parts for streetcars. Initially this effort involved the manufacture of wooden parts and was linked to the furniture industry, which was gaining importance in High Point. In 1917 he founded his own company, the Thomas Car Works, to construct streetcars; it employed thirty workmen, and its first order was for four cars by the neighboring city of Winston-Salem. Fire destroyed Thomas's facilities in 1921, but he rebuilt, realizing great success in the 1920s. Two of his biggest orders in these years were for 150 cars for New Orleans and 100 for Detroit. The market for streetcars declined after 1930 with the depression and ensuing downturn in the popularity of streetcars as a means of transportation. In the 1930s the company began to produce bus transport equipment. In 1936, when Thomas bid on school buses for the first time, he convinced buyers to adopt all-steel construction instead of a composite (wood reinforced with steel). He also innovated a new safety door that swung outward, thus incorporating a feature of the streetcar design that he had previously used. These changes were a breakthrough in school bus manufacture and secured the future of Thomas Car Works. 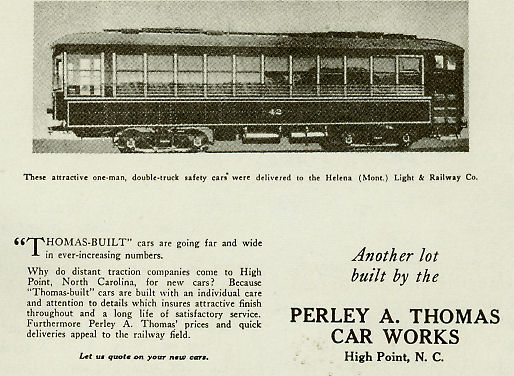 During World War II Thomas Car Works, now largely converted from a wood to a metal industry, handled large orders from the U.S. Army. Among the items manufactured were metal pontoons for barges and bridges, metal bodies for radar equipment, and buses. The company also performed body repairs on army vehicles and for these services received a citation from the Ordinance Section, U.S. Army. By 1950 Thomas Car Works, which had always been a family corporation, operated a modern assembly line manned by 350 skilled laborers. At full production the output reached 1,700 buses per year. Aside from the chassis and engine, the materials were processed and installed at the plant.

Perley A. Thomas retired from active management of the company in the 1950s but retained the title of president until his death. But the Thomas story continued to unfold. In 1978, under the third generation of family management, Thomas of High Point occupied 125 acres, had 400,000 square feet of plant facilities, and produced approximately 6,000 units for world distribution. In addition, plants in Canada and Ecuador manufactured buses for those markets.

Shy and taciturn except when animated by an exciting idea, Thomas was an excellent supervisor and a diligent worker. His hobby was designing and making bedroom and dining room furniture of cherry, mahogany, and oak. He was also active in civic affairs as a member of the First Baptist Church, an Elk, a Mason, and a Shriner.

In February 1897 Thomas married Margaret Milne. At one time or another all of their children—Melva T., Mary, J. Willard, and J. Norman—were involved in the management of the business. The Thomas family provided significant economic diversification in High Point, a city where some would contend that textiles and furniture have been too dominant. Thomas died in Jacksonville, Fla., where he was interred in Greenlawn Cemetery. In addition to his offspring, he was survived by his second wife, Joan Madden Thomas.

Perley Albert Thomas. From the NC Transportation Hall of Fame.