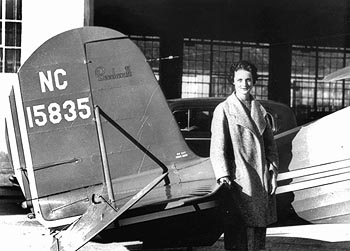 Louise Marcellus McPhetridge Thaden, businesswoman and aviatrix, was born in Bentonville, Ark., the daughter of Roy Fry and Edna Hobbs McPhetridge. She attended the University of Arkansas (1921–25), where she switched her major from journalism to physical education and premedicine, making it impossible to graduate without extensive extra work. Beginning a career in aviation, she was manager of the D. C. Warren Company, airplane distributors, in 1928–29 and worked in public relations at Pittsburgh Aviation Industries, Inc., during the period 1930–31. Afterwards she assisted in developing the National Air Marking Program for the Bureau of Air Commerce covering much of the western United States, flying her own plane and persuading cities to paint their names atop large buildings for easier identification from the air. For a time she was factory representative of the Beech Aircraft Corporation and of the Porterfield Aircraft Company. She next was purchasing agent for the Thaden Engineering Company, involved in plastics research and development, and vice-president and director of Thaden Molding Corporation. Active in the Motor Corps of the American Red Cross from 1946 to 1952, she became a lieutenant colonel in the Civil Air Patrol in 1949. In 1959 she was made chairman of the National Commanders Training Commission and served as a command pilot.

When she flew her 180-horsepower plane to an altitude of 20,260 feet in 1928, she was higher than any woman had been before. She also held the record for solo endurance (1929), speed (1929), refueling endurance (1932), light plane speed (1934), East-West speed (1936), and 100 km. speed (1938). She won the first woman's derby in 1929 and the Bendix Transcontinental Trophy Race in 1936, the first year women were allowed to enter the contest, when she flew a Beech Staggerwing from New York to Los Angeles in fifteen hours, setting a new coast-to-coast record. Also in 1936 she received the Harmon Trophy from the Federation Aeronautique Internationale as outstanding aviatrix. Louise Thaden was elected to the Aviation Hall of Fame. Her book, High, Wide and Frightened , a first-person account of her early days with airplanes, was published in 1938.

A charter member of the Ninety-Nines, an international organization of women pilots, she also held membership in the Veteran Air Pilots, OX5 Club, Silver Wings, and Defense Advisory Committee on Women in the Services. She was secretary of the National Aeronautic Association in 1937–38.

She married Herbert von Thaden in 1928, and they had two children, William and Patricia, both of whom became pilots. She and her husband played a significant role in the development of all-metal airplanes. In 1956 the Thadens moved to High Point, N.C., and became the owners of Thaden Engineering, a company engaged in development engineering in plastics. After a time they also began to make reinforced plastic furniture. After her husband's death in 1969, Mrs. Thaden continued the business. She died in High Point, where a memorial service for her was held in St. Mary's Episcopal Church.

Jean Adams and Margaret Kimball, Heroines of the Sky (1942)