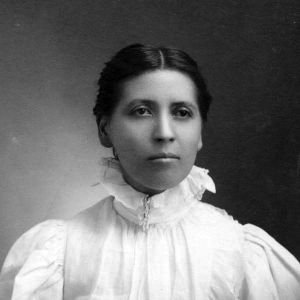 Sallie Walker Stockard, teacher, author, and the first woman to receive a degree from The University of North Carolina, was born near Saxapahaw, Alamance County, the daughter of John Williamson and Margaret Ann Albright Stockard. In 1897 the university trustees passed an ordinance admitting women to postgraduate courses. Already a graduate of Guilford College, Sallie Stockard enrolled and received an undergraduate degree in 1898 and a master's degree in 1900. Her graduate thesis, a history of Alamance County, was published in the latter year. Her graduate diploma is now in the North Carolina Collection at the university.

In 1900 she published The Lily of the Valley , described as a dramatic arrangement of the Song of Solomon. County history seems to have been of particular interest to her, and in addition to the history of her native county published in 1900, her History of Guilford County appeared in 1902. After moving to Arkansas, she published The History of Lawrence, Jackson, Independence, and Stone Counties of the Third Judicial District of Arkansas in 1904.

She married P. Magness, and they were the parents of a son, Scott A., and a daughter who became Mrs. Wendell Kilmer. She lived in Orlando, Fla., for a time but then moved to West Hempstead, N.Y., to live with her daughter. An Episcopalian, she died in a nursing home on Long Island, N.Y.