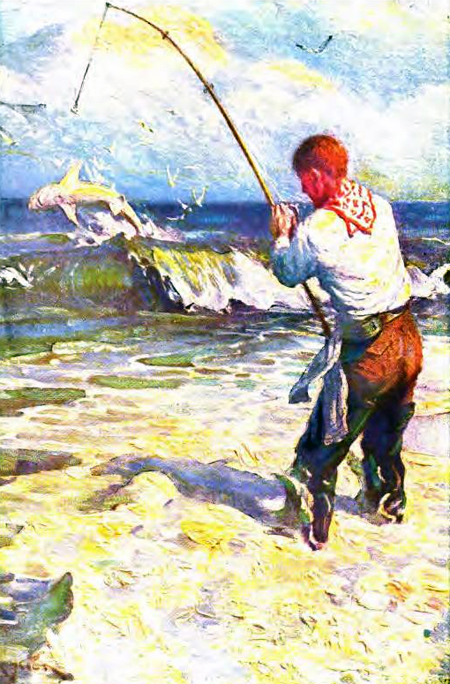 Frank Leonard Stick, artist, author, conservationist, and developer, was born in Huron, S.Dak., the son of David L., a banker and merchant, and Lydia Jane Marcellus Stick. He attended public schools in Huron and later in Oglesby, Ill., where the family moved in 1899, and as a teenager he was expected to do his share of the work in the family store. But young Stick was much more interested in the outdoors than in the confinement of the mercantile business and spent as much of his time as possible hunting, fishing, and camping. Always a keen observer of detail in the things he saw around him, and inquisitive by nature, he began making sketches of the animals and birds he saw in the woods around Oglesby, thus demonstrating at an early age an exceptional natural talent for painting.

Encouraged by his parents in his pursuit of a career as an artist, he moved to Chicago in his late teens in order to secure some basic instruction in painting and sold his first illustration to Sports Afield magazine when he was nineteen. Later he received a coveted invitation to study in Wilmington, Del., under the famed illustrator Howard Pyle, sharing one of Pyle's studios with N. C. Wyeth. During this period he developed specialized techniques in the field of outdoor illustration, and for the next quarter of a century his paintings appeared regularly in the Saturday Evening Post, Ladies Home Journal, Country Gentleman, St. Nicholas, Field and Stream, and other periodicals, including numerous covers for Outdoor Life. In addition, he painted many calendars, almost invariably scenes of hunting, fishing, and canoeing. Many people knew him best for his paintings of dogs, and over a period of more than a decade he produced dozens of illustrations for the popular short stories of Albert Payson Terhune. Stick was both an avid conservationist and a hunter, and an irony of his attitudes and of his artwork was that at the same time as he was illustrating shooting scenes for the calendars of major manufacturers of arms and ammunition, he was also turning out widely used paintings, without pay, for the Anti-Vivisection League of America.

He wrote numerous articles on the outdoors for national magazines, served for a brief time as editor of Field and Stream, and was coauthor, with Van Campen Heilner, of an early book on surf fishing, The Call of the Surf, which he also illustrated. With other Howard Pyle students he established an informal artists' colony in Interlaken, on the New Jersey coast. Stick was elected the first mayor of the borough of Interlaken in 1922.

An avid fisherman, he was a close friend and frequent fishing companion of Zane Grey and illustrated some of Grey's books. One of their trips together in the mid-1920s was to the Outer Banks of North Carolina in quest of channel bass, and Stick was so impressed with the area that he began acquiring extensive Outer Banks property holdings. In 1929, having tired of producing a steady flow of illustrations-on-order for magazine and calendar publication, he moved his family to Skyco, on Roanoke Island, put aside his brushes and paints, and for fifteen years concentrated on making a living from house construction, real estate, and other activities entirely unrelated to his profession as an artist. At the same time he worked for the orderly development of the Outer Banks as well as the preservation of its natural resources.

In 1933 Stick conceived and for nearly two decades promoted the establishment of a national park on the Outer Banks, and as secretary of the Cape Hatteras National Seashore Commission he secured donations of extensive landholdings that formed the nucleus for the nation's first national seashore recreational area. An integral part of his plan for a national seashore park on the coast was the stabilization of the fragile sandbanks, and towards this end he designed and supervised the construction and installation of the first sand fences erected on the barren beach and the planting of beach grasses and other vegetation. By the late 1930s more than 4,000 men, including members of the Civilian Conservation Corps, transient laborers, and local WPA work forces were engaged in this work along the Outer Banks.

In the early 1940s his interest again turned to art. Having worked previously only in oils, he began experimenting with other mediums, including sculpture and water-colors. A self-trained ichthyologist, he was called on frequently by local commercial fishermen to identify unusual species, and he began making watercolor sketches of these as he identified them. This led to a major project, which occupied much of his time for more than a decade, in which he planned to produce a series of accurate and lifelike watercolors of East Coast fish. When the work was completed in the mid-1950s, he had produced paintings of nearly three hundred fish, but his plan to put these in book form during his lifetime did not materialize.

In 1947 he began the development of the community of Southern Shores near Kitty Hawk, dividing his work load between real estate and construction activities and painting in his studio there. During the winter months he headed south, spending considerable time on the Florida Keys, on the Isle of Pines, and in the Virgin Islands. In the 1950s Stick was instrumental in the establishment of the Virgin Islands National Park.

During the last ten years of his life he worked extensively in watercolor. More than seventy-five of these paintings, mostly seascapes, are preserved at the Outer Banks History Center in Manteo, along with approximately fifty nine illustrations that appeared in two books written by his son, Graveyard of the Atlantic and The Outer Banks of North Carolina.