Alexander Stewart, Anglican clergyman, was born at Lisburn, County Antrim, Ireland, the son of Charles Stewart. He matriculated at the University of Dublin on 4 Oct. 1739 and was graduated with a B.A. degree in 1744. Soon afterwards he received an M.A. degree and entered the Anglican priesthood. There is no record of his activities in Ireland prior to his leaving for North Carolina.

He arrived in the colony in 1753 to serve as chaplain to his relative, Governor Arthur Dobbs, also a native of County Antrim. Stewart had expected to be assigned to Christ Church Parish, New Bern, but finding that post already occupied by the Reverend James Reed, he accepted the vacant parish of St. Thomas in the town of Bath, Beaufort County. He began his tenure on 1 Oct. 1753 and resided at Bath until his death. In 1754 he was appointed missionary from the Society for the Propagation of the Gospel in Foreign Parts to St. Thomas Parish with the salary of £50 a year. Stewart also held services in Hyde County and in Pitt after that county was formed from Beaufort in 1761. At one time he had thirteen chapels under his care in addition to the parish church of St. Thomas. 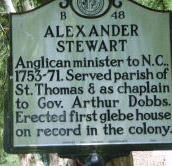 Stewart also was appointed agent and superintendent for North Carolina for the society called "Dr. Bray's Associates." This Church of England group, dedicated to the spiritual welfare and education of the Indians and Negroes in the colonies, had been organized in 1723 by the Reverend Thomas Bray, the same clergyman who in 1701 had founded the Society for the Propagation of the Gospel and had sent three libraries to North Carolina—one to St. Thomas Parish—as a part of the society's work. Stewart paid visits to the remnants of the "Attamuskeet," Hatteras, and Roanoke tribes in Hyde County and held services among them. In 1763 he established a school in the county for their benefit, undoubtedly with funds provided by the Bray group.

When Stewart arrived in Bath, the brick church, still standing, had been finished. A glebe of three hundred acres adjoining the town had been granted to the parish in 1706, but no dwelling had ever been built. Under his direction a glebe house and appropriate outbuildings were erected and finished by the spring of 1763, the first such glebe residence, as he wrote his superiors in London, that had ever been built in North Carolina.

During Stewart's ministry the Baptist faith began to spread in North Carolina. Concerned by his flock's "falling off from the Church," he attempted to counter this influence by baptizing by immersion himself on occasion and by writing a small pamphlet, The Validity of Infant Baptism, published by James Davis in New Bern in 1758. The only known copy of this work, by "A. Stewart, A.M. Minister of Beaufort County, North Carolina," is in the library of Harvard University.

Like many settlers who were not native to the climate, Stewart's health began to fail after ten years in the province. He spent much of the year 1766 on crutches and, when traveling to New Bern on business, had to be carried in a horse litter. He visited Portsmouth Island in the hope that bathing in the sea water would relieve his lameness. For that year, the vestry of St. Thomas refused to pay his salary because he had been unable to officiate. In 1767 he moved from the glebe house to a nearby plantation on Durham's Creek south of the Pamlico River, thinking that this location would be healthier. Later in the year he paid a short visit to England. Stewart died in the spring of 1771, leaving, as the Reverend James Reed informed the London authorities, a widow, four children, and his affairs in great confusion.

Despite the illness towards the end of his life, Stewart was more effective than the average Anglican clergyman in colonial North Carolina, although not on the level of his contemporary, the Reverend Clement Hall. Unlike most ministers, he had some means of his own; he began to acquire property in Beaufort County soon after his arrival and contributed £60 of his own funds to the construction of the glebe house in Bath. It is to Stewart's credit that two of his parishioners became clergymen. In 1769 he recommended his lay reader of twelve years, Peter Blinn, for holy orders. Blinn, who had represented Bath in the Assembly in 1767, was ordained in England, but there is no record that he ever officiated in North Carolina. Nathaniel Blount, a native of Beaufort County, was ordained two years after Stewart's death and thereafter, until his own death in 1816, ministered to the Episcopal church in what had been the colonial parish of St. Thomas.

Alexander Stewart is said to have married five times. His first wife and their sons, Alexander and Charles, died soon after arriving in Bath. In 1755 he married Elizabeth, the daughter of Benjamin Peyton and the widow of John Peyton Porter of The Garrison, Beaufort County. It is not known when she died. By 1763 Stewart had married Sarah Pilkington, the widow of Michael Coutanche. On the decease of Sarah he married Penelope Johnston Dawson, widow of John Dawson. The widow he left behind was a Miss Hobbs. The record of Stewart's children is unclear as no will has been found. In 1760 he spoke of two unnamed sons being educated in Ireland. By his second wife he had a daughter Rosa, who married John Kewell and went to England to live. A daughter of this marriage, Anna Maria Kewell, returned to Beaufort County, where she married John Gallegher of Washington and left descendants. The deeds and estate records of Beaufort and Pitt counties indicate that Stewart had four other children: Alexander, second of the name, James, William Samuel, and a daughter who married Jordan Shepherd of Pitt County and had three daughters.

Joseph B. Cheshire, "The Church of the Province of North Carolina," in Sketches of Church History (1892).

Marshall D. Haywood, Lives of the Bishops of North Carolina (1910).