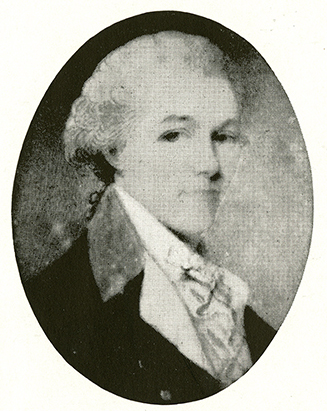 Young Dawson probably attended the College of William and Mary, although the records are incomplete and do not include his name. Left an orphan, he made his home with his uncle Thomas Dawson. His youthful extravagances and a tendency to run up bills he could not pay probably tried his uncle's well-known "Sweet, Engaging Temper." John was appointed "Surveyor of Albemarle in the room of Col. Joshua Fry, dec." by his uncle, President Stith, in 1754. He lived for a time with one J. Nicholas in Albemarle, and in 1755–56 spent several months in the office of Colonel Peter Jefferson to learn "practical Surveying."

A young heiress, Penelope Johnston, the orphaned daughter of Governor Gabriel Johnston of North Carolina, had been living in Williamsburg for a year or more with Governor Dinwiddie's family, sharing the instructions of the Dinwiddie tutor and absorbing the amenities of life in the governor's palace. Her elopement with young John Dawson in 1758 caused consternation, certainly on the North Carolina side of the border. But the match was a happy and auspicious one. The couple lived at Eden House, Bertie County, and had four children: Mary, who married Nathaniel Allen; Penelope, who married Tristram Lowther; William, who died unmarried; and Lucy, who evidently died young.

Dawson, who is referred to by contemporaries as "Col. Dawson," practiced law, but was chiefly busy with the management of his wife's large plantations on or near the Chowan River. Although described as a member of the Assembly and of Governor Dobbs's council, he has been confused with a contemporary of the same name. Visitors to Eden House spoke of being "highly pleased with the family," as well as "surprised at the good sense and accomplishments of Mrs. Dawson." Colonel Dawson's mansion was noted for its "splendid hospitality" and the "refined society generally assembled there."

Dawson died at Eden House and was probably buried there. His miniature by an unknown artist is owned by his descendants.

Dawson's widow, Penelope Johnston Dawson, was one of the signers of the "Edenton Tea Party" declaration, in which fifty-one ladies of the Albemarle region supported the decisions of the First Provincial Congress in North Carolina. His son, William Johnston Dawson, was a member of the Convention of 1788 and of Congress. He also was one of the commissioners to select a site for and report the plan of the city of Raleigh, giving his name to one of its streets.