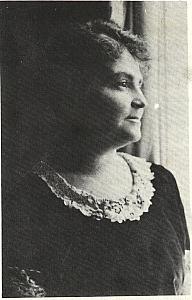 Bertha Strauss Sternberger, civic leader and philanthropist, was born in Mayesville, S.C., on the the large cotton plantation of her parents, Mr. and Mrs. Alfred A. Strauss. Her earliest schooling was in Sumter, and she was graduated from Winthrop College in Rock Hill. On 25 Apr. 1900 she married Emanuel Sternberger, a rural merchant in South Carolina. He was a friend of Moses and Ceasar Cone, who welcomed Sternberger into their recently established manufacturing business in Greensboro, N.C. The three men began to produce Canton flannel, which Sternberger had recommended as a desirable product, and they soon gained a wide reputation because of it.

When Bertha Sternberger was stricken with bulbar paralysis, her throat became so constricted that she had to be fed through a tube and her weight fell to a mere seventy-five pounds. Some fifty physicians were consulted, among them Dr. S. Weir Mitchell of Philadelphia. He told her about a park and playground program that was being established in Philadelphia and supported by the sale of special stamps. She was interested but was too ill to help. Instead, she went to Germany to seek treatment from specialists. Finally, after eight years of suffering, she began a slow recovery. During this time the people of Greensboro had expressed their concern in many ways, and with her recovery she began to think of ways to thank them.

Remembering Dr. Mitchell's account of Philadelphia's park and playground program, she proposed that a similar program be organized in Greensboro. She was rebuffed by city officials until 1910, when a small facility was opened. Nearby residents objected to the noise of the children, however, and it was closed. This effort attracted support from city authorities, parent-teacher associations, and private donors, and in 1918 a playground director for recreational programs was hired but discharged after a year for lack of funds. But the experience demonstrated the value of parks and playgrounds, and soon afterwards they were firmly established. Half a century later Greensboro had a dozen active centers.

Bertha Sternberger also was interested in public education, and from 1921 to 1927 she was the first woman to serve on the city board of education. In the face of considerable opposition, she succeeded in gaining approval for the acquisition of a large tract of land for a cluster of schools—afterwards the site of Brooks Elementary, Kiser Junior High, and Grimsley Senior High schools. In addition, she urged an improved course of study, and it was largely through her interest and support that a high school orchestra was organized.

After the death of her husband in 1924, Mrs. Sternberger and her two daughters, Blanche and Emelia, established the Emanuel Sternberger Education Fund from which loans were made without interest for the educational expenses of students, without regard to their age, creed, color, or sex. Large sums of money were made available, and some recipients later made significant contributions to the state and nation. Mrs. Sternberger also gave generously of her intellectual and financial resources to the Travelers Aid Society, the Children's Home Society of North Carolina, the Crippled Children's Commission, the League of Women Voters, the American Red Cross, and the center of her religious activities, Temple Emanuel.

Bertha Sternberger believed in the value of human dignity, and she encouraged everyone she knew to do their best—both for themselves and for others. Her greatest gift, according to associates, was her ability to bring out the best in others. In her fiftieth year, at the height of her usefulness, she contracted sleeping sickness and died. Her remains were deposited in a family mausoleum in Forest Lawn cemetery, Greensboro.