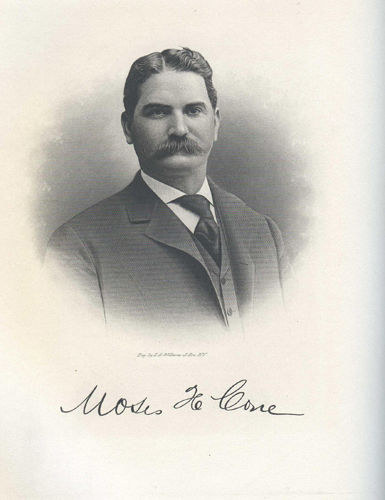 Moses Herman Cone, industrialist and philanthropist, was born in Jonesboro, Tenn., the son of Herman and Helen Guggenheimer Cone, natives of Bavaria. For further details of the life of Moses Herman Cone, see the sketch of his brother, Ceasar.

Cone was educated in Baltimore, Md., where his father operated a wholesale grocery business from 1870 until 1890. Moses and his brother bought the C. E. Graham Manufacturing Company in Asheville in 1887, and Moses reorganized it in 1892 as the Asheville Cotton Mills. Moses was in large measure responsible for the construction of the Southern Finishing and Warehouse Company in Greensboro, which was an early part of the brothers' plans for their textile enterprise in that city. In 1899 he built at Greensboro the Revolution Mill, which soon became the world's largest flannel mill. He was president of the Cone enterprises.

Cone married Bertha Lindau in 1888, but they had no children. In about 1900 he bought a large tract of land near Blowing Rock, and in 1950, after Mrs. Cone's death in 1947, the 3,500-acre estate with its magnificent mansion was given to the federal government as a Blue Ridge Parkway recreational area. The Moses H. Cone Memorial Park contains fine stands of balsam, dense forests of pine, and a deer park; there are bridle paths and wooded walks and trails around two lakes. Mountain crafts are exhibited and sold there, and demonstrations of various crafts are presented during the summer season. Moses Cone was buried on a nearby mountain slope.

The Moses H. Cone Memorial Hospital occupies a sixty-seven-acre site in Greensboro and is only one of his benefactions. He left a trust fund of $15 million from which support has been given to a wide variety of worthwhile causes. He served on the first board of trustees of the Appalachian Training School for Teachers at Boone, near his mountain home, and aided that institution, now Appalachian State University, in a very generous way.