Abraham Gottlieb Steiner, Moravian clergyman, Native American missionary, and school inspector, was born and raised in Bethlehem, Pa., the son of Abraham Gottlieb and Salome Borstler Steiner. He was educated at the Moravian school of Nazareth Hall, where he later taught for a few years. In 1788 he was called to Hope, N.J., to run the church store, and the next year he was needed in Bethabara, N.C., to tend the store and tavern. When it became necessary for the community to register another justice of the peace under North Carolina law, Steiner assumed that position as well.

It was as a missionary among Native Americans that Steiner made his most significant contribution to the congregation of North Carolina. In 1799 the Helfer Conferenz, which supervised Moravian affairs worldwide, instructed the Salem congregation to establish a mission for the education of the Cherokee Indians in the area. Missionary work was a major concern of the Moravians, and Steiner had long been interested in the progress of the Indian mission on the Muskingum River, in Ohio, which had been founded by the Moravians from Bethlehem. He had visited that mission and was well qualified to help establish a similar outpost in the South.

Responding enthusiastically to the missionary call, Steiner and another Moravian brother left Salem in 1800 bound for Knoxville, Tenn., to begin planning a settlement and school in an Indian village. After lengthy negotiations with the Indian chiefs and with the U.S. government officials for Indian affairs, it was decided that the mission would be located at Spring Place, Ga., nearly four hundred miles from Salem. Although Steiner never lived at the mission on a full-time basis, he made frequent trips there over the next five years. He was responsible for much of the planning and for overseeing the building of a school at Spring Place. When conflict arose between the Indians and the missionaries, Steiner negotiated with them and made settlements that were fair to both sides. 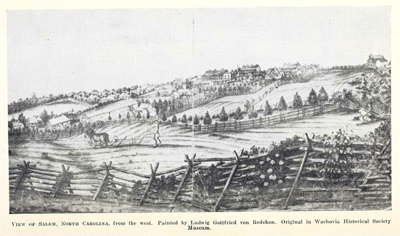 By 1803 the mission at Spring Place was going well enough for the Moravians to consider starting another one. Steiner met with Colonel Benjamin Hawkins, federal agent for the Creek Nation, to discuss the possibility of opening more missions like the one at Spring Place in other locations. Hawkins was very receptive to the Moravians' proposals and promised to help in any way that he could. Plans progressed too slowly for Steiner to have a hand in the actual establishment of more missions, and he was forced to abandon his visits to the Indian villages when he became weak from fevers sustained during the trips to the unaccustomed climate.

When he returned to Salem in 1803, he was ordained a deacon in the church and sent to Hope as the minister for that small congregation. In 1806 he was asked to return to Salem to become inspector of the girls' school. At that time, by virtue of his new position, he was made a member of the Helfer's Conferenz in Salem. In 1809 he and his wife also became members of the Elder's Conference in Salem. Poor health forced Steiner's retirement as inspector in 1816. His resignation was accepted regretfully because he was so well liked by the students and the community as a whole. He did remain active in the affairs of the congregation by occasionally filling in as school inspector, traveling to Pennsylvania on congregation business, and making brief inspection trips to the missions. From 1820 to 1822 he took on the job of inspector for the boys' school but again had to retire due to failing health. While in the latter position he served for a year as Pfleger (warden) of the choir of single brothers.

In 1822 an African American congregation was organized, and Steiner was asked to serve as its minister; he accepted and for ten years held one service each month. In 1826 and again in 1830 he was elected to the Aufseher Collegium in charge of the material and financial affairs in Salem. His many years of public service ended in 1832, when, after returning from a visit to Bethlehem, Pa., his health worsened and he died.

Steiner's first wife, Christina Fischer, whom he married in 1789, died in childbirth the following year. In 1791 he married Catherine Sehner, who bore him four children: Maria, Sarah, Carl Abraham, and Elizabeth.

Edmund Schwarze, History of the Moravian Missions among Southern Indian Tribes of the United States (1923).