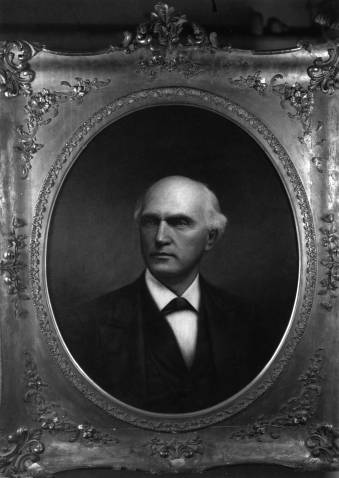 Walter Leak Steele, lawyer, politician, and businessman, was born at Steeles Mill (now Littles Mill) near Rockingham, the son of Thomas and Judith Moseley Leak Cole Steele. He began his higher education at the preparatory school of the Reverend Solomon Lea in Boydton, Va., then enrolled at Randolph-Macon College, where he remained only a few months. After attending freshman classes at Wake Forest College for a time, he returned to Richmond County and entered a school in Wadesboro taught by the Reverend John Burke. In January 1840 he was a student at The University of North Carolina but in September the faculty prevented him from continuing. Dr. Elisha Mitchell interceded, however, and Steele reentered as a freshman in 1841. At Chapel Hill he subsequently earned A.B. (1844) and A.M. (1847) degrees.

After studying law (though he did not obtain a license), Steele won election to the state House of Commons in a bitterly fought contest; he served in 1846, 1848, 1850, and 1854. In 1852 and 1858 he was a member of the state senate. In 1854 he introduced a bill to incorporate the Wilmington and Charlotte Railroad Company, amended to extend the line to Rutherfordton. Afterwards he was elected to the company's board of directors. Though Steele began his political career as a Whig, he switched to the Democratic party in 1856 but that year was defeated at the polls.

In 1860 he was a delegate to the Democratic National conventions in Charleston and Baltimore. With the success of the Republican ticket, however, Steele became involved in the secession movement. At the state convention of 1861 he served as secretary and signed the ordinance of secession. He then offered to raise a company of cavalry, but was turned down; he finally became a private in the state troops, though he never saw action. After the death of his wife in 1863, he married Mary J. Little, the daughter of his cousin Thomas Little. Their children were William Little, George Spencer, Robert Thomas Stephen, Samuel Spencer, Mary Little, and Anna Leak.

At the end of the Civil War, Steele's former connection with the Secessionists precluded his political activity for a short time, but he was vocal in his opposition to the Reconstruction acts. When Reconstruction ended, he reentered the political arena as a presidential elector for the Tilden (Democratic) ticket. From 1877 to 1881 he served two terms in the U.S. House of Representatives. Declining to seek reelection in 1880, he returned to his home in Richmond County and in 1882 succeeded his brother as president of the Pee Dee Manufacturing Company, a textile mill that eventually housed Rockingham Industries. He remained in that post until his death.

In 1852 Steele was appointed a trustee of The University of North Carolina; he also presided over the alumni association. In recognition of over thirty years' service to the university, he received an honorary LL.D. degree in 1891. He often contributed articles on various subjects to magazines, but particularly to hunting journals as he was an avid hunter. Steele was also a noted chess player, eulogized as the best in the state. However, he was best known for his ability as a speaker, a talent he had sharpened in college as a member of the Dialectic Society, one of the two debating societies at the university. A popular commencement speaker, he gave addresses at Greensboro, Mount Pleasant, Randolph-Macon, and The University of North Carolina, among other institutions. On the latter occasion he was notified of his appointment in another's absence only two days beforehand but prepared the obligatory long oration without apparent difficulty. Steele also was involved in financial affairs and served on the board of directors of the state penitentiary, to which he was appointed without his knowledge.

In 1891 Steele traveled to Baltimore to undergo surgery, from which he did not recover. He was buried in the Leak family cemetery near Rockingham.

John Gilchrist McCormick, "Personnel of the Convention of 1861," James Sprunt Historical Monographs, no. 1 (1900).