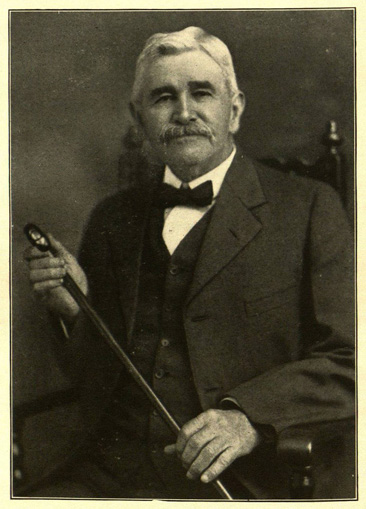 James Columbus Steele, inventor and industrialist, was born near Elmwood, Iredell County, the son of John Mitchell and Elizabeth Derinda Bell Steele. He was the great-great-grandson of Ninian Steele, a captain in the Continental army who served with distinction during the Revolutionary War. James C. Steele attended Ebenezer Academy at Bethany Church and subsequently studied under James H. Foote, J. H. Hill, and H. J. Grimes in Taylorsville. His father was a farmer and noted cabinetmaker, and so James received early training as a carpenter and cabinetmaker, a trade he plied before the Civil War.

On 7 June 1861 Steele enlisted in Company C, Fourth North Carolina Infantry. The next month he was assigned to the regimental band, in which he remained, with only forty days' absence, throughout the conflict. He frequently served as courier and litter bearer, and though he did not carry weapons, he was exposed to all the hazards of the battlefield at Seven Pines, Antietam, and Gettysburg. Steele also ran messages pertaining to the surrender at Appomattox. He preserved his recollections in his book, Sketches of the Civil War (1919).

After the war Steele operated various sawmills and at least two small and elementary brick factories in the Statesville area. On 19 Oct. 1871 he married Eudora Velinda Montgomery, the daughter of William Thomas and Elizabeth Crawford Montgomery, of Cool Spring Township.

Being mechanically inclined, Steele endeavored to become a manufacturer of brick plant equipment. In the aftermath of the Civil War he perceived that such equipment had to be rugged, as well as unusually simple and durable; yet to be effective it must also multiply the effort of hand labor. Moreover, it had to be suitable for an area lacking both trained technicians and money for capital investment. Responding to these strict criteria, Steele in 1887 invented and in 1889 patented a light hand-operated brick truck that enabled one man to move brick more quickly and safely over rough yard terrain from sites of fabrication, drying, and firing than three men could do previously. Accordingly, in 1889 Steele formed with his eldest son, Clarence Montgomery, the New South Brick Machine Company to manufacture and sell the improved brick truck; he soon established a vigorous market in the eastern half of the United States.

Between 1889 and 1900 Steele's business flourished as three other sons—Henry Oscar, Alexis Preston, and Flake Futhey—entered the firm and expanded its operations to the manufacture of other clay-working equipment. By 1896 New South was marketing various items of brick plant equipment as well as the brick truck. In 1900 the firm was renamed J. C. Steele and Sons, a name retained throughout the years.

Although Steele retired in 1902, he remained an adviser to the firm until his death. Thereafter he turned his energies to public service. For many years he won election to the Statesville Board of Aldermen and served for two terms as mayor (1903–7). He also was an elder of the First Presbyterian Church of Statesville and for several years sat on the board of regents of the Presbyterian Orphans' Home at Barium Springs. He was buried in Oakwood Cemetery, Statesville.

Captain Ninian Steele and His Descendants (1901).