Laurence Tucker Stallings, U.S. Marine, columnist, playwright, novelist, and chronicler, was born in Macon, Ga., of a southern family known for its long line of Baptist ministers and its Confederate dead. His father, Larkin Tucker, son of the Reverend Jesse Stallings of Stallings, S.C., was, at the time of Laurence's birth, a teller for the First National Bank of Macon, but about 1911 he became treasurer of a wholesale drug company and moved his family to Atlanta, Ga. Laurence's mother, Aurora, was the daughter of Dothan, Ala., surgeon Dr. George Washington Brooks. A brother, George Brooks Stallings, and a sister, Ruth (Mrs. Preston Witherspoon), completed the household. 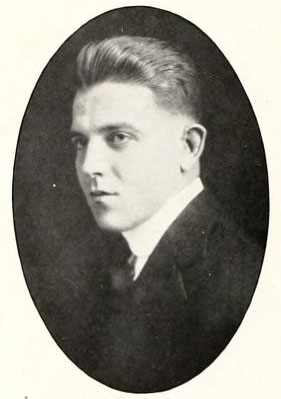 Laurence, the youngest, grew up romanticizing war as "a diet of shining swords" and beckoning "plumes" (phrases from his novel Plumes ). Graduated from Gresham High School, Macon, in 1911, he worked for the Royal Insurance Company of Atlanta, then left in the fall of 1912 for Wake Forest College, where he was aided financially by the Reverend John E. White, a Baptist minister friend of his father. A handsome youth over six feet tall, Stallings played football, which he loved and described in Plumes as "a savage pleasure . . . a struggle for survival"; majored in classical studies and biology; and wrote for college publications, serving in his senior year as editor of the literary magazine, The Old Gold and Black. At Wake Forest he met Helen Poteat, who later became his first wife; she was the daughter of Dr. William Louis Poteat, college president and professor of biology. Poteat's successful efforts to defeat legislation prohibiting the teaching of evolution in North Carolina schools were labeled "Poteatism" by Stallings in an article he later wrote for the New York World and "Bibbism" in Plumes after his fictional character, Dr. John Milton Bibb.

In 1915 Stallings went to Atlanta as a reporter for the Journal but returned to Wake Forest for the awarding of his A.B. at commencement, 1916. During this time he served with his father's old unit of the Georgia National Guard, but on 29 May 1917 he joined the U.S. Marine Corps Reserve and was assigned to active duty on 25 July. On 9 October he accepted a second lieutenant's commission in the regular Marine Corps and sailed with the Second Division in 1918 in time to be part of the heavy action at Chateau-Thierry. He escaped injury until 26 June, the last day of the Battle of Belleau Wood, when he led an assault on a machine gun nest; his right kneecap was ripped off, but he threw his hand grenade anyway, thereby wiping out the entire nest. For this he won the Croix de Guerre and a Silver Star and suffered a lifetime of pain, anguish, and, finally, the amputation of both legs (the first in 1922 and the second, after injuries from falls, in 1963). Stallings returned home a captain in 1919; in and out of hospitals, he was out in March 1919 to marry Helen. He was retired on 28 June 1920 and settled in Washington, D.C., where he did free-lance reporting for the New York Times. In 1922 he received an M.Sc. degree from Georgetown University.

While recuperating from the leg amputation, he began Plumes, an autobiographical novel, thought by some to have been a source for William Faulkner's Sartoris. After a trip to Europe with his wife, he returned to New York, joined the staff of the World, and, with George S. Kaufman, Robert Benchley, Dorothy Parker, and others, formed the Algonquin Round Table. Plumes was published in 1924, the year that saw the production of the stage hit, What Price Glory?, which Stallings coauthored with Maxwell Anderson. The success of that play furthered the collaboration, which resulted the next year in New York productions of First Flight and The Buccaneer.

Famous overnight, Stallings was taken to Hollywood by Irving Thalberg, introduced to King Vidor, and pressured by Vidor into writing the script for The Big Parade, a movie that made Vidor famous as director, won stardom for John Gilbert, and helped establish Metro Goldwyn Mayer (MGM) financially. By 1926 Stallings "retired" with his wife to Forest Home, the estate near Blanch, N.C., that Helen's father had given them. There Stallings gathered an extensive library of impressive facsimiles and the complete works of his favorite authors: Shakespeare, G. B. Shaw, Balzac, and Joseph Conrad. In 1928 his daughter Silvia was born and in 1932, Diana. Restless, he acquired an apartment in New York. There he worked with Oscar Hammerstein II on the musical, Rainbow, produced in 1928 and filmed in 1930 as Song of the West. He also began writing for the New York Sun and published about four hundred long literary articles, mostly reviews. Meeting Ernest Hemingway, he adapted A Farewell to Arms for the stage and, in 1932, for the screen. In 1933 The First World War: A Photographic History, for which he wrote the introduction, captions, and notes, was published with great success by Simon and Schuster, but only after Lincoln Schuster had pressured Stallings to do the work just as King Vidor had done earlier. (The book was reissued in 1963.) In 1934 Stallings became editor of Fox Movietonews; in 1935, literary editor of the American Mercury ; and in 1936, associate editor of American Mercury, of which "The Library" section reflects his knowledge of books and history. From 1924 to 1933 he also wrote a number of short stories, six of which were published in such magazines as Saturday Evening Post, Collier's, and Cosmopolitan.

In 1935 he led a news and newsreel expedition, sponsored by Fox and the North American Newspaper Alliance, to Ethiopia to cover the anticipated Italian invasion. He was back in the United States by February 1936, when he obtained a divorce from his by-now-estranged wife Helen. Beginning a "second life," he married on 19 Mar. 1937 Louise St. Leger Vance, his secretary at Fox, by whom he had a son, Laurence, Jr. (1939), and his last child, Sally (1941). He gave up his extensive library and home in North Carolina, signed a new contract with MGM, and moved to Santa Barbara, Calif., never to return to the South.

In 1942 Stallings did go back to Washington, D.C., as marine officer, chief of the Interview Section, on the staff of General Henry H. Arnold. Retired in 1943 with the rank of lieutenant colonel, he moved back to California, this time to Whittier. He wrote one play, The Streets Are Guarded, which folded after only twenty-four performances in 1944; published numerous articles; and expanded one article, "The War to End War," into The Doughboys (1963), an account of the American Expeditionary Force from June 1917 to 11 Nov. 1918.

On 24 June 1964 Stallings was honored for his service to his country by the presentation of a silver plaque and other mementos brought to his home by Major General Raymond Kier, fleet marine commander, with a full complement of officers and men forming an honor guard. Four years later, after a short illness, Stallings died of a heart attack at his home in the Pacific Palisades. He was buried in Rosecrans Veteran's cemetery, Point Loma, Calif.

Margaret Case Harriman, The Vicious Circle: The Story of the Algonquin Round Table (1951).