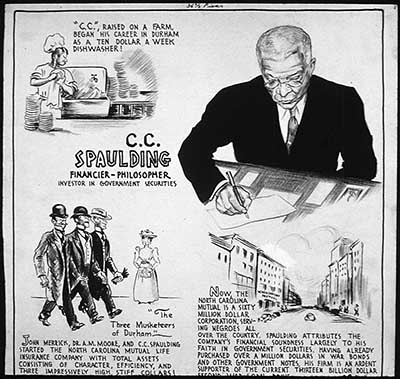 Charles Clinton Spaulding was a prominent and influential African-American businessman. One of fourteen children of Benjamin McIver and Margaret Moore Spaulding, he was born in Columbus County on August 1,1874. Charles’s parents were the first generation of free ancestry and were successful landowners and respected leaders in their community.

In 1894 Spaulding left the family farm and moved to Durham, where his uncle, Dr. Aaron M. Moore, was living. There, he finished high school and worked as a dishwasher, waiter, bellhop, and office boy. In 1898 he was named the general manager of an African-American owned grocery store. Instead of living check to check he was finally able to settle down and pursue a career. His job as general manager did not last long. In 1899 the owner of the store sold his interests, leaving Spaulding 300 dollars in debt. During this time Spalding's uncle and six other black entrepreneurs founded the North Carolina Mutual and Provident Association. Charles’ uncle and John Merrick, a local barber, were two of the seven businessmen who hired Charles Spaulding as a part-time agent to sell policies across the state. In less than two years he was named general manager of North Carolina Mutual, although he was the only employee.

In 1900 Charles married Fannie Jones, John Merrick’s half-sister. He had four children, three sons and one daughter) by her and raised them in Durham, North Carolina.

He quickly expanded North Carolina Mutual’s operations, which had nearly 100,000 clients in 1908, not only in North Carolina, but other states as well. Spaulding was elevated to vice president in 1908. North Carolina Mutual provided life insurance for African Americans that were denied by other places because of their skin color.

In 1919 both Charles’s first wife Fannie and company founder John Merrick died. The board of North Carolina Mutual elected Charles Spaulding secretary-treasurer. With this new position came power and Charles Spaulding changed the name of the company to North Carolina Mutual Insurance Company. The company continued to grow and was now in 13 states and the District of Columbia.

In 1923 Charles’s uncle died, making Charles president. Although Spaulding was already seen as the company's de facto leader, this new position pushed him into the national spotlight. He was now the outright owner of the North Carolina Mutual Insurance Company. Charles Spaulding led the company from 1900-1952 as the largest business owned by an African-American. He directed not only North Carolina Mutual but also an extended family of financial institutions, including the Mechanics and Farmers Bank, the Bankers Fire Insurance Company, and the Mutual Savings and Loan Association.

In the late 1920s he started to receive rewards for all of his accomplishments. He received national business awards, and joined president Herbert Hoover's federal relief committee. During World War II, Spaulding assisted the U.S. Government in selling war bonds to African-Americans and invested a large percentage of North Carolina Mutual's funds in the bonds. He was known as an American business icon, despite the fact that he was an African-American. He served as a functionary in the Democratic Party. During the New Deal Spalding influenced President Franklin D. Roosevelt’s appointments to the “Black Cabinet.” He held political positions such as secretary of North Carolina Commission on Interracial Cooperation, chairman of the Durham Committee on Negro Affairs (DCNA), and president of the Urban League's National Emergency Advisory Council. These political positions helped bridge the gap between southern politics and race relations. He was also a trustee for the John F. Slater fund, Shaw University, and Howard University. Hard work and determination carried Charles Spaulding through his life and he used his success as an example to encourage the black community and show them that it is possible for an African-American in society to be successful.