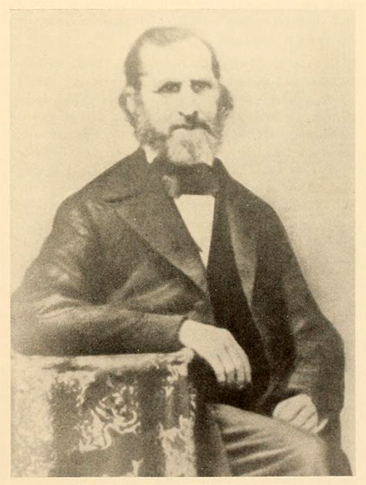 Patrick Jones Sparrow, Presbyterian minister and educator, was born in Lincoln County. At an early age he worked to support himself and his widowed mother, reportedly a "very bright woman," and distinguished himself as a precocious student. Impressed with his ability, friends and neighbors shared and discussed books with him and eventually sent him to Bethel Academy, in South Carolina, where he studied under the Reverend Samuel Williamson.

After his formal education, he continued studying languages and in 1826 secured a license to preach at Long Creek Church in Cleveland County. About 1828 he was appointed pastor of Lincoln Presbyterian Church; in 1831, of Unity Church; and in 1834, of Salisbury Church. He also became coprincipal of the Salisbury Male Academy.

In 1834 Sparrow was appointed a financial agent for a college proposed by the Concord and Bethel presbyteries. He traveled as far as Pittsburgh, Pa., to raise funds, a journey memorialized in his fragmentary "Itinerarium," now in the Davidson College archives. The fund-raising efforts proving successful in 1837 when Davidson College was organized, he was elected to the first professorship of ancient languages as well as to the original board of trustees. Two of his extant works from this period, The Inaugural Address of Rev. P. J. Sparrow, A.M., 2 August 1837 (1838) and The Duty of Educated Young Men of this Country (1839), exemplify his knowledge of classics and his power as a rhetorician.

Although in 1837 he had declined an "urgent" call from the Sixth Church in Philadelphia, in the summer of 1840 he accepted the pastorate of Hanover Church, Prince Edward County, Va. About 1841 he received a doctor of divinity degree from Hampden-Sydney College. Several years later, on 1 May 1845, he was elected to the eighth presidency of Hampden-Sydney and was inaugurated on 12 November. Continued in this office for two years, he resigned on 21 Sept. 1847.

In 1847 Sparrow moved to Tuscaloosa Presbytery, Ala., and became principal of the Presbyterian High School in Eutaw. The following year he preached at Burton's Hill Church, and in 1850 he became a teacher in Newbern, Ala. Soon afterwards he began preaching at Marion, Ala., and served as a missionary in the South Alabama Presbytery.

In 1853 he settled in Pensacola, Fla., where he became the second pastor of the First Presbyterian Church, served Bagdad and Milton churches, and worked at founding a church at Warrington. Early in 1862, having lost his belongings to the invading Northern army, he was evacuated by Confederate troops. Destitute and in ill health, he settled in Cahaba, Ala.

The Record of the Hampden-Sydney Alumni Association (October 1956 [portrait]).