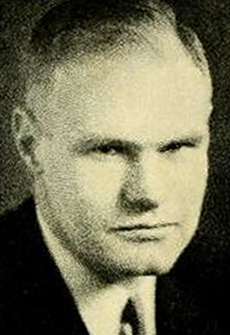 Carl Gray Snavely, college football coach, was born in Omaha, Nebr., the son of Charles, a Methodist minister, and Bessie Boggs Snavely. He was raised in Pennsylvania and attended Lebanon Valley College, where he played baseball, football, and basketball. He was graduated in 1915. From 1915 to 1926 he coached football at a number of high schools and prep schools in Pennsylvania and Ohio. Snavely gained national attention for his success at Pennsylvania's Bellefonte Academy. He also played two years of minor league baseball. In 1927 he was hired from Bellefonte to become head football coach at Bucknell University, in Lewisburg, Pa., where he compiled a record of 42 wins, 16 losses, and 8 ties in seven seasons.

In 1934 Snavely became head football coach at The University of North Carolina. His first team in Chapel Hill won 7 games, against only 1 loss and 1 tie. This team featured George Barclay, the school's first football All-American. The next year the university team won its first eight games and was being touted as a Rose Bowl possibility before a season ending upset loss to Duke University. Despite these successes Snavely did not see eye-to-eye with university president Frank Porter Graham, a persistent critic of big-time college football, whose abortive Graham Plan would have deemphasized the sport at the university and in the remainder of the Southern Conference. Snavely abruptly left North Carolina in April 1936 to become head coach at Cornell University.

Snavely stayed at Cornell for nine seasons. His 1939 team was undefeated in eight games. The coach gained favorable national attention in the 1940 Cornell-Dartmouth game when a referee's mistake allowed Cornell to score the winning touchdown on a fifth down play. After confirming the mistake on film, Snavely forfeited the game to Dartmouth. He ended his tenure at Cornell with three Ivy League championships and a record of 46 wins, 26 losses, and 3 ties.

In 1945 Snavely returned to Chapel Hill after having been assured that his program would have the full support of the administration. His 1945 team won half of its ten games. Snavely's glory years at Chapel Hill were from 1946 to 1949. Bolstered by returning GI's, most notably All-American back Charlie Justice, The University of North Carolina spent those four years among the nation's elite. The 1946 team won 8, lost 1, and tied 1 in the regular season before losing 20–10 to the University of Georgia in the Sugar Bowl, North Carolina's first bowl game. Snavely's 1947 team won 8 and lost 2 and did not play in a bowl game. The 1948 team won 9 with only a single tie. The Tar Heels then lost to the University of Oklahoma 14–6 in the Sugar Bowl. The 1949 team earned North Carolina's third bowl visit in four years, a 27–13 Cotton Bowl defeat to Rice University, which followed a 7-win, 3-loss season. In this four-year period The University of North Carolina won two Southern Conference championships, in 1946 and 1949, and finished in second place the other two years. It was ranked in the final Associated Press Poll Top Ten in 1946, 1947, and 1948, reaching a peak ranking of number three in 1948. Charlie Justice finished second in the voting for the prestigious Heisman Trophy, awarded to the nation's top player, in 1948 and 1949, and was awarded the Walter Camp Trophy as national player of the year in 1948.

Snavely was unable to maintain the program at this high level. A series of disputes, ranging from the size of the school's recruiting budget to his inability to successfully switch from the outmoded single-wing formation to the split T, handicapped the program and again alienated Snavely from the school and its supporters. After losing seasons in 1950, 1951, and 1952 he left North Carolina. Despite the dismal last three seasons, he departed with a University of North Carolina record of 59 wins, 35 losses, and 5 ties.

He finished his coaching career at small Washington University in St. Louis, where he became an increasingly vocal critic of big-time college football, and retired from coaching in 1958. With a record at four colleges of 180 wins, 96 losses, and 16 ties, he was named to the National Football Foundation Hall of Fame in 1965.

Snavely had a reputation as a hard-working, stern, no-nonsense perfectionist. He was especially well regarded as a teacher of the single wing, the most common offensive formation until after World War II. He was an active member of the American Football Coaches Association and served as its president in 1952. An enthusiastic amateur photographer, Snavely was a pioneer in the use of game films as a teaching aid. He was also an avid golfer.

Snavely married Bernice Clara Richardson in 1915. Their son, Carl Gray, Jr., a navy pilot, was killed in action in World War II. In 1944 they adopted an infant son, Carl Gray III. Coach Snavely died in Kirkwood, Mo., two years after the death of his wife.