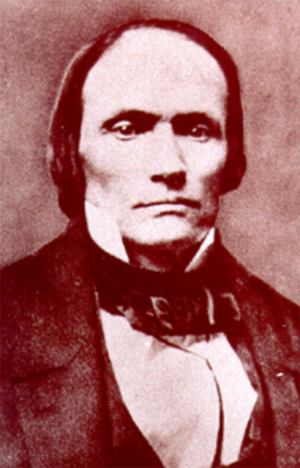 George Washington Smyth, surveyor, jurist, and congressman, was born in North Carolina, the son of Samuel Smyth, a German-born millwright, and a Scots-Irish mother. His father owned a gristmill on Little Swift Creek in Craven County a few years before the American Revolution, and that is probably where young Smyth was born. When George was three, the family moved to Fayetteville, Tenn., and later to Alabama. While in Tennessee he received some elementary education in Maury County. On 20 Jan. 1830, against the wishes of his family, he left for Texas, arriving at Nacogdoches on 14 February. He served for a time as a schoolteacher, then became surveyor at Bevil's Settlement near present Jasper. He continued as surveyor until 1834, when he was elected a land commissioner.

A delegate to the state constitutional convention in 1845, Smyth afterwards was commissioner of the General Land Office from 1848 to 1857. Elected to Congress, he served a single term (1853–55) and was not a candidate for reelection. Although he opposed secession, his son enlisted in the Confederate army with his father's approval. Smyth died in Austin while attending the convention to form a new state constitution after the Civil War. He was buried in the state cemetery in Austin. In 1936 the state erected a marker at the site of his home ten miles southwest of Jasper. Smyth's grandchildren gave his papers to the University of Texas Library in the early 1930s.

Louis Wiltz Kemp, Signers of the Texas Declaration of Independence (1944).