Edward Smithwick (or Smethwick, Smithwike), Council member, Assembly member, and justice, was probably born in Virginia. His parents were Hugh, who migrated to Virginia before May 1642, and Elizabeth Smithwick. In 1659 Hugh and Elizabeth moved to the Albemarle area, then a virtually unsettled part of Virginia but soon to be granted to the Lords Proprietors of Carolina and to become the nucleus of a new colony. The family then included four children—Edward, Hugh, Ralph, and Elizabeth. 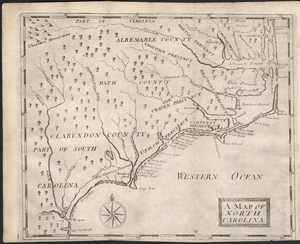 Little is known of the Smithwicks' early years in Albemarle. In 1669 Hugh patented 370 acres of land under the recently established government of the North Carolina colony, then called Albemarle. He died before November 1679, and his widow married one Ward, apparently Rice Ward. Three of the Smithwick children may have died young, as no mention has been found of Hugh, Ralph, or Elizabeth as adults, but a son John, born after the family moved to Albemarle, lived to adulthood.

By March 1679/80 Edward Smithwick was married and was living in Chowan Precinct, where his family originally had settled. In the early 1680s his house was the meeting place of the precinct court and the county court.

Nothing is known of Edward's political activities before 1680, if there were any, and little is known of those during the eighties. It is evident, however, that he resisted the abuses and frauds perpetrated by Robert Holden, secretary and customs collector, who gained ascendancy over the colony in 1680 and dominated it for about two years. Smithwick was one of several colonists who were arbitrarily arrested and imprisoned on Holden's order, and later he was one of the adverse witnesses at Holden's trial.

Smithwick did not make a career of politics in any period, but he served briefly in several public offices in the 1690s and later. In July 1690 he was a member of the Council, which under the leadership of Thomas Jarvis was then attempting to restore order following the ousting of Governor Seth Sothel and the accompanying disorders. Smithwick remained on the Council at least through February 1690/91. During that period he made official trips to Virginia, apparently to consult Philip Ludwell, then governor of Albemarle, who was living in Virginia.

About 1703 Smithwick was a member of the Assembly for at least one term; he was again a member in 1711 and 1712. He was a justice of Chowan Precinct Court from 1699 to 1701 and probably longer. In 1712 he was appointed by the Council to a special court to hear an appeal from the court of admiralty.

A loyal Anglican, Smithwick served on the vestry of St. Paul's Parish from December 1701, when the parish was organized, until January 1714/15, when he resigned because of poor health. He was a warden for several terms, and for a number of years he was custodian of the Chowan set of standards for weights and measures, which was provided by the vestry. He donated the land and the plank for the first church building erected in the parish and contributed to funds for a minister's salary and other purposes.

Smithwick, who was about ten years old when his family settled in Chowan, lived in that precinct for the rest of his life. No doubt he, like most other colonists, was a planter. He acquired extensive landholdings and appears to have speculated in land. At his death he owned several thousand acres, of which 3,420 acres were sold by his executors. He gave his two older sons, Edward and John, about 800 acres apiece during his lifetime, and no doubt comparable amounts were reserved by the executors for the two younger sons.

Smithwick was married four times. His first wife, Lydia, died before 29 Mar. 1680, by which time he had remarried. His second wife, Elizabeth, was living as late as 31 July 1688. At some date before 1 Dec. 1702 he married his third wife, Africa. By 27 Oct. 1703 Africa had died, and Smithwick had married Sarah Gillam, widow of Thomas Gillam and previously widow of William Woollard.

Smithwick's will, dated 21 Jan. 1715/16, was proved the following October in Chowan Precinct Court. In it he referred to his "beloved wife," presumably Sarah; sons Edward, John, Edmond, and Samuel; daughter Sarah; and grandchildren Africa Smith and Edward, John, Martin, and Sarah Griffen.