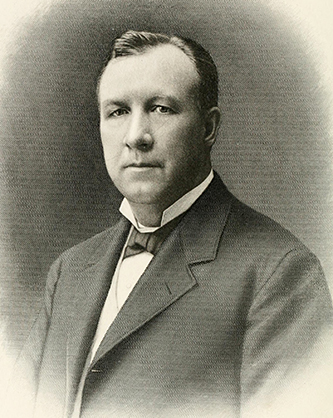 [Michael] Hoke Smith, secretary of the interior, governor of Georgia, and U.S. senator, was born on the Catawba College campus then located in Newton, the son of Hildreth Hosea of Deerfield, N.H., and Mary Brent Hoke Smith of Lincolnton, N.C. His father had been a lawyer in Washington, D.C., but failing eyesight led him to accept a professorship in science and languages at Catawba in 1851. Six years later the family moved to Chapel Hill, where the elder Smith joined the faculty of The University of North Carolina. There and in Lincolnton Hoke Smith grew up, and as an adult he returned frequently for vacations. He was educated by his father, and after the family moved to Atlanta in 1872, he began to study law.

Licensed in 1873, he soon enjoyed a lucrative practice, arguing cases against corporations, particularly railroads, and becoming an outspoken foe of big business. He entered local politics and in 1887 acquired the controlling interest in the Atlanta Journal, which for many years served as his political platform. The paper called for tariff reform, criticized corporation-dominated state politics, demanded a good roads program, and campaigned against lynching, the convict-lease system, and saloons. Although Smith sold his shares in the Journal in 1900, it continued to back him politically for many years. A vigorous supporter of Grover Cleveland in the 1892 presidential campaign, he was rewarded with appointment as secretary of the interior.

As secretary he was praised as a fair and effective administrator who corrected many problems in the department. Nevertheless, he basically acquiesced in the long-accepted practice of individual exploitation of the environment for private gain. His Indian policy continued that of the first Cleveland administration—breaking down tribal organization while individualizing and integrating Indians into society at large. Although unsuccessful, it fitted well with a related policy of opening the Indian Territory to white settlement. Although he set aside thirteen forest reserves, his conservation record proved meager.

Smith resigned from the cabinet in 1896 and returned to his law practice in Atlanta, where he helped build the Piedmont Hotel and the Fulton National Bank. As president of the Atlanta Board of Education, he introduced vocational training in the public schools. In 1906 he won the gubernatorial election on a reform platform that also proposed the disfranchisement of blacks and thereby won the crucial support of Populist party leader Tom Watson.

In his first term (1907–9), Smith strengthened the railroad commission, reformed the election system, established juvenile courts, abolished the convict-lease system, increased appropriations for education, and enlarged the state's corporate regulatory powers. A constitutional amendment disfranchising blacks was passed and ratified. Although not reelected in 1908, he was successful in 1910 and began his second term as governor in July 1911. A few days after his inauguration, he was elected by the legislature to fill an empty Senate seat. Ignoring a storm of criticism, however, he remained at the governor's post for four months in order to push through his reform program: an antilobbying bill, establishment of a Department of Commerce and Labor, modernizing and improving the school system, and several agricultural education measures.

As a U.S. senator from 1911 to 1921, Smith was recognized as a leader who became an administration spokesman. A skillful parliamentarian and compromiser, he helped smooth differences over the new income tax and the Federal Reserve Bill. As chairman of the Committee on Education and Labor, he guided through Congress several important measures, including the Smith-Lever Agriculture Extension Act of 1914 and the Smith-Hughes Vocational Education Act of 1917. He supported the Federal Farm Loan Act of 1916, as well as other legislation to help cotton farmers. He opposed the Federal Child Labor Bill on the basis that it was unconstitutional (the U.S. Supreme Court later found it so) and opposed woman suffrage and national Prohibition. Always sympathetic to labor, he voted for the Adamson Eight-Hour Act. As a member of the Judiciary Committee he fought the appointment to the Supreme Court of the liberal Louis Brandeis, but after pressure from the administration and Georgia labor and a personal interview with the appointee, Smith voted for confirmation.

His position on the European war, which made him unpopular with the administration and eventually with Georgia voters as well, paved the way for the end of his political career. Taking a strictly economic stand, he vigorously protested British seizure of exports to Germany and Austria and demanded that arms sales to Britain be prohibited in retaliation. He halfheartedly supported preparedness and in 1917 reluctantly voted for war against Germany. Smith exasperated many of his followers by first criticizing measures granting extraordinary war powers to the president, then ultimately voting for such measures. When the armistice came, he called for a quick return to "normalcy" and an end to government controls.

In the 1920 senatorial primary campaign, the League of Nations was a key issue; Smith favored it but with certain reservations. Tom Watson, who opposed the league, defeated Smith. Smith remained in Washington until 1925 lobbying for various interests and arguing alien property claims, but then he returned to Atlanta.

On 19 Dec. 1883 he married Marion McHenry (Birdie) Cobb of Athens, Ga., the daughter of Thomas R. R. Cobb, a lawyer and former Confederate general. They had two sons, Marion and Hildreth (the latter died in infancy), and three daughters, Mary Brent, Lucy, and Callie. His wife died in 1919, and on 27 Aug. 1924 he married Mazie Crawford of Cordele, Ga. His funeral was held at Atlanta's North Avenue Presbyterian Church where he had been a charter member and elder, and he was buried in nearby Oakland Cemetery.