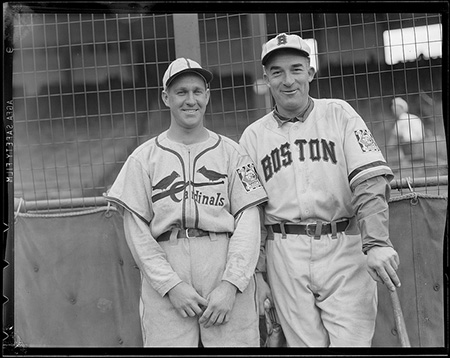 Enos "Country" Slaughter is a well known name in the history of baseball because he typified the determined spirit and hustle of the game. It has been said that baseball is the mirror of America and in this sense Enos Slaughter was more than a consistent hitter with an accurate arm. He was also a mirror of the times in which he lived and played the game.

Enos Bradsher Slaughter was born in Person County, North Carolina near the town of Roxboro on April 27, 1916. He was the third of six children born to Zadok and Lonnie Slaughter. The Slaughters were a farming family, and Enos attributes his physical fitness to his farm work as a boy. Slaughter credits his strong and accurate throwing to his habit of hunting rabbits as a boy by throwing rocks at them. His parents encouraged sports among their children. During family trips to Durham, North Carolina to watch the Durham Bulls play baseball, young Enos realized that his greatest desire in life was to become a professional baseball player. In high school, Slaughter played basketball, football, and baseball. He played well enough to earn an athletic scholarship to Guilford College in Greensboro, North Carolina. Though his parents encouraged him to continue his education, Enos rejected the scholarship. From that point on, Slaughter focused on playing baseball.

Slaughter took a job working at the Collins and Aikman textiles mill where his older brothers worked because the mill had a baseball team. Enos Slaughter began playing second base for Ca-Vel and his abilities caught the eye of Fred Haney the sports editor of The Durham Morning Herald. Haney passed Slaughter's name to Oliver French, who owned the Greensboro farm team of the St. Louis Cardinals. The Cardinals were managed by Branch Rickey, a baseball pioneer, who was the father of the minor league "farm" system and would later break professional baseball's color barrier. French took Haney's advice and invited Slaughter to a tryout for the Cardinals' organization in September 1934. Slaughter's performance at this tryout earned him a position with the Martinsville Redbirds of the Bi-State League.

In 1936 Slaughter had improved enough to be moved to Columbus, Georgia and the South Atlantic League, where he played for a salary of $100 a month. While at Columbus Slaughter was mentored by Eddie Dyer. It was Dyer who scolded Slaughter for slowly making his way off the field once and inspired Enos to always run to and from his position. This hustle to and from his position as well as on the field were to become Slaughter's hallmarks. Enos was moved in 1937 to the Cardinal's farm team in Columbus, Ohio managed by Burt Shotton. Shotton began calling Slaughter "Country Boy", which was shortened to "Country." The nickname stuck.

"Country" Slaughter made his first major league appearance with the St. Louis Cardinals in 1938 and remained with the team until 1953 except for the years of his military service from 1943 to 1945. Slaughter later played for the New York Yankees, Kansas City Athletics, and Milwaukee Braves. During this time Slaughter played in five World Series and ten All-Star Games. He led the National League in triples, double plays by an outfielder, and assists twice. Slaughter also led the league in runs batted in (RBIs) in 1946. The Sporting News named Slaughter to their Major League All-Star Team twice.

Slaughter's hustle and performance on the field were to be marred by events which mirrored the difficulties the nation faced in dealing with issues of equality and civil rights. In 1942 Branch Rickey left the St. Louis Cardinals to organize and manage the Brooklyn Dodgers. In 1947 Rickey broke baseball's color barrier by signing Jackie Robinson to a contract with Brooklyn. That same year Slaughter attempted to influence the Cardinal players to go on strike in protest of Robinson's presence on the Dodger's roster. The strike attempt failed. In a later game against the Dodgers, Slaughter intentionally spiked Robinson.

Slaughter's hustle on the field and athletic ability will always be tainted by his reaction to Jackie Robinson. His attitude was similar to the attitude that North Carolina and the nation would come to face in the civil rights movements of the 1960s.

Enos "Country" Slaughter retired from major league baseball in 1959. He was a player-manager in 1960 for a minor league team in Houston and for Raleigh in 1961. Slaughter coached baseball for Duke University from 1971 to 1977. In 1985 Enos Slaughter was inducted into the National Baseball Hall of Fame. He is also a member of the North Carolina Sports Hall of Fame at the North Carolina Museum of History in Raleigh.

Enos Slaughter died on August 12, 2002, from complications of non-Hodgkins lymphoma. He was 86 years old.