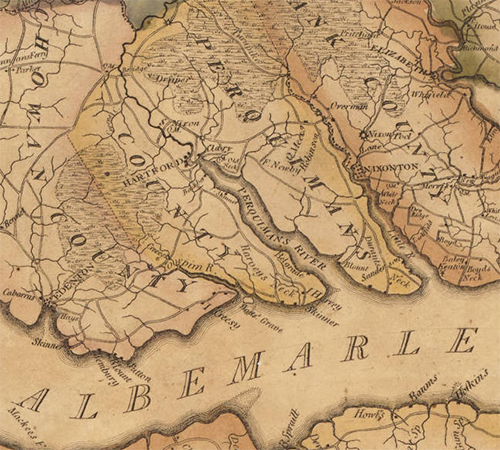 John Skinner, first U.S. marshal for the district of North Carolina and the state's chief enumerator for the 1790 federal census, was born in Perquimans County to Joshua and Sarah Creecy Skinner. Members of the Skinner family were among the earliest settlers of the county, established in 1688. John Skinner's great-grandfather Richard moved south from Isle of Wight County, Va., prior to 1701.

Young Skinner apparently acquired his early education around tours of duty in the North Carolina Continental Line. He represented Perquimans in the state senate in 1784 and in the House of Commons in 1785, 1786, and 1787. In his first year of public service he was nominated, though never seated, as one of eight delegates to represent the state in the Continental Congress. In 1788 and 1789 he served on the Council of State under Governor Samuel Johnston. In the legislature Skinner supported acts to improve navigation in Albemarle Sound and advocated equitable rates of taxation. He was consistently a champion of the Federalist cause, and at Hillsborough in 1788 and Fayetteville in 1789 he represented Perquimans in conventions called to consider ratification of the U.S. Constitution.

On 8 June 1790 the U.S. Senate confirmed President George Washington's appointment of Skinner as the first federal marshal for the district of North Carolina. The primary responsibilities of the marshal were to attend to the federal courts and to execute all lawful precepts issued to them under authority of the U.S. government. One of his first duties was to oversee the taking of the first federal census in 1790. During his four-year term he also supervised the public auction of seized lands and impounded goods. In August 1794 he was succeeded by Michael Payne of Edenton.

In late 1794 and again in 1797 the citizens of Perquimans County returned Skinner to the General Assembly. He is believed to have built his Perquimans seat, Ashland, sometime after 1775; however, he may have acquired it through his second or third wife, both daughters of wealthy landowners in the area. Ashland, located on the Perquimans River in the Harveys Neck section and one of the finest homes in northeastern North Carolina, was destroyed by fire in 1952. In 1790 he owned 850 acres and 38 slaves in Perquimans County. At some time after 1797 Skinner moved to Chowan County, where he built an estate known as Montpelier on Albemarle Sound, three miles outside Edenton. Although Montpelier was somewhat smaller than Ashland, he owned 31 slaves in 1810. Aside from his involvement in the tobacco trade, Skinner and his brother, Joshua, owned a mill and bake house at the mouth of the Perquimans River. In 1789 they sought to retain John Gray Blount as an agent for their bread and flour in the town of Washington. John Skinner also owned a fishery in Chowan.

Skinner and his first wife, Mary Creecy, were married in 1780 and had a son, Lemuel. Skinner married Sarah Harvey, daughter of Thomas and Mary Harvey, in 1786; they had two sons, Thomas and John, both of whom died in infancy. Sarah Skinner died in August 1789, and ten months later Skinner married Anna Harvey, daughter of John and Sarah Harvey. They had eight children: William, Harriet, Joseph, John, Sarah, Henry, Alexander, and Mary. Anna was remarried in 1820 to Thomas Billings.

John Skinner's religious affiliation and burial place are unknown. However, his father, who had been a Quaker, and his mother Sarah, who had been a Methodist, are both said to have become Baptists after marriage and to have been buried in a Baptist cemetery in Perquimans. John Skinner, described by the Edenton Gazette as "an opulent and very respectable inhabitant of this county," died at Montpelier after "a long indisposition." According to the terms of his will, his wife Anna received the house with provision that it pass to their son, John. Sons Joseph and Henry received other tracts, and the slaves were equally divided among all the heirs.