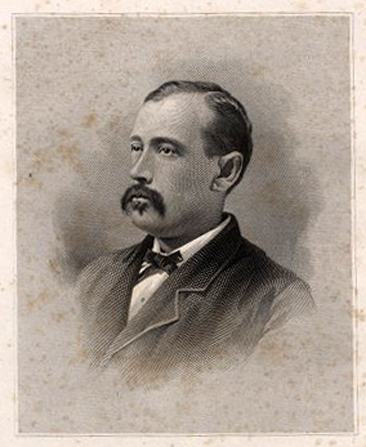 John Williams Shackelford, congressman, state legislator, Confederate officer, attorney, merchant, and farmer, was born at Richlands, the only child of Dr. John and Indiana Ambrose Humphrey Shackelford. Reared by his maternal grandfather, Colonel William A. Humphrey, Shackelford attended the Richlands Academy. He entered college but left at age seventeen to enter the Confederate army. From the rank of private in Company H of the Third North Carolina Regiment, he rose to the rank of lieutenant in the Thirty-fifth Regiment of North Carolina Volunteers and was taken prisoner near Greenville. In August 1865 he returned home, where on 19 Sept. 1865 he married Mary Catherine Wallace of Richlands.

On the local level Shackelford served twice as a magistrate, farmed, and engaged in various mercantile ventures. He had a cotton gin in 1879, and he was a partner in Harget and Steed (1881) and in Harget, Taylor, and Company (1882). Though he had no children of his own, he raised a girl named Fannie Heath, whose indigent father gave her to the Shackelfords at age two and a half. The foster parents renamed her Katie Williams Shackelford.

Shackelford was a member of the Methodist Episcopal Church, South. He was interred in the Wallace family cemetery at Richlands. A photograph of him can be found in the Tucker Littleton Collection at the North Carolina State Archives, Raleigh.

[United States Congress]. "Memorial addresses on the life and character of John W. Shackelford, (a representative from North Carolina) delivered in the House of Representatives and in the Senate, Forty-seventh Congress, second session." Washington: Government Printing Office. From the North Carolina History and Fiction Collection, East Carolina University Digital Collections. http://digital.lib.ecu.edu/16824 (accessed May 7, 2014).