Thomas Fielding Scott, Episcopal bishop, was born in the community of Scotts in west central Iredell County, the son of James and Rebekkah Worke Scott. Sometime in his youth he was a blacksmith and after a day of hard work he would gather lightwood knots to provide illumination for reading in the evening. This, he later said, was the means of his earliest education. As a young man he moved to Georgia and in 1829 was graduated from Franklin College in Athens (now the University of Georgia), from which he also received an honorary doctor of divinity degree in 1853. He was a large man, over 6 feet tall and weighed around 250 pounds. 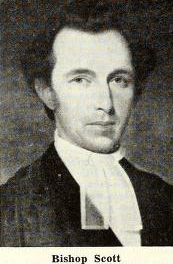 Scott was licensed as a Presbyterian to preach in 1830 and served a number of rural churches in small towns in Georgia and Tennessee. After meeting Bishop James H. Otey and the Reverend Leonidas Polk, he "made a thorough study of the Scriptural and historical claims of the Episcopacy" and reached "the firm and unalterable conclusion that the doctrine was true." Having become concerned over the splits in the Presbyterian church, he became an Episcopalian in 1842. The following year he was ordained deacon in St. Paul's Church, Augusta, Ga. Advanced to the priesthood in Christ Church, Macon, in 1844, he served churches in Marietta and Columbus. In 1852 at Macon, Ga., at the Seventh Annual Fair of the Southern Cotton and Agricultural Society, he was awarded a silver pitcher for the best acceptable essay on "The Management and Treatment of Slaves."

The General Convention of the Episcopal Church in 1853 elected Scott missionary bishop of the Territory of Oregon, with jurisdiction in the Territory of Washington—a region that also included the later state of Idaho and portions of western Montana and western Wyoming. He was consecrated in Christ Church, Savannah, on 8 Jan. 1854. Bishop Scott was counted a good scholar and an effective preacher. In his own words he was "conservative and catholic," yet an acquaintance from his early days in Oregon recalled that he never wore vestments but instead "officiated in a citizen's suit."

Sailing south and crossing the Isthmus of Panama, the new bishop and his wife reached Oregon on 22 April. He made his headquarters at Portland and served his vast territory during the period 1854–66; at times he also administered the Diocese of California. It was reported that he traveled by canoe, stagecoach, horseback, or foot. Sometimes his route lay through uncharted country, through Indian territory, and in places where food and lodging were scarce. In spite of these apparent difficulties, Scott set about laying broad plans for the growth of the Episcopal church in the Northwest. One of the stations in his territory was five hundred miles from his home, yet after just a little over two years two schools were operating and in 1861 publication of the Oregon Churchman was begun.

The labors of Bishop Scott, so far removed from other churchmen, served as an inspiration for the whole country. His magnificent work was well known and appreciated, and in spite of extreme handicaps he laid secure foundations which were necessary for the achievements of those who followed him. It has been said that his "vision was greater than his opportunity," and he was considered "an authentic martyr of the American Church."

In 1830, while living in Georgia, he married Evelyn Appleby, whose ill health in 1866 prompted the bishop to offer his resignation. En route to the General Convention of 1867 by sea and again crossing Panama, Scott became ill and on 11 July was taken from the ship to a hospital in New York where he died three days later of "Panama fever." He was buried in Trinity churchyard in the cemetery beside the Chapel of the Intercession at 155th Street and Broadway. Bishop and Mrs. Scott had no children.