Michael Schenck, merchant and cotton manufacturer, was born in Lancaster County, Pa., of Swiss ancestry. His father was also named Michael. Around 1790 young Schenck moved to Lincolnton and established himself as a merchant. He purchased items for his store in his native Pennsylvania and paid for the goods with cattle that were driven north from Lincolnton. In Pennsylvania Schenck had been a member of the Mennonite church. He joined the Dutch Lutheran church in Lincolnton but later grew dissatisfied with some of its tenets and became a Methodist. Schenck was an early member of Lincolnton's first Methodist congregation, organized in 1824. His enthusiasm for Methodism was conveyed to his children, for his four daughters all married Methodist ministers. 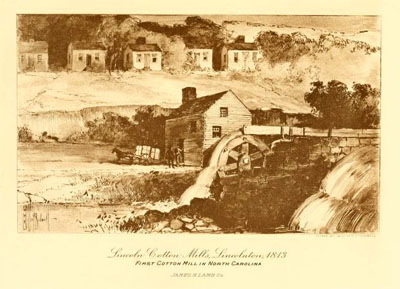 The chronology of Schenck's career as a merchant is uncertain. It is known that he established a second store at Sherrills Ford in present-day Catawba County, and he was a partner in the firm of McBee, Reinhardt, and Schenck, from which he retired in 1821. In 1813 Schenck was one of the first southern merchants to enter the cotton textile industry. By 1860 some of the most important southern cotton manufacturers were former merchants who, like Schenck, sought other outlets for investing their capital. Schenck's first mill, a small structure by later standards, was built at McDaniel's Spring, about two miles from Lincolnton. He ordered the spinning machinery from Providence, R.I. The gears and shafting were manufactured locally by two skilled ironworkers, Schenck's brother-in-law Absalom Warlick and Michael Beam. A flood destroyed the dam of the first mill, and Schenck moved downstream on Mill Branch to rebuild.

In 1819 Schenck, Dr. James Bivings, and John Hoke, another Pennsylvanian who moved to Lincolnton in 1797 and became a prosperous merchant, purchased new machinery and constructed a mill about two miles south of Lincolnton on the south fork of the Catawba River. Called the Lincoln Cotton Factory, it was one of the most successful factories in antebellum North Carolina. By 1840 the production of coarse yarn was valued at $21,373 annually. As was common at many of the early mills, the proprietors operated several small industries, including an ax factory. Schenck and Bivings sold their interest in the company to John Hoke in 1835, and Schenck retired. The Lincoln Cotton Factory operated until 1863, when it burned.

David Schenck, Historical Sketch of the Schenck and Bevens Families (1884).

Brown, John Howard. Lamb's textile industry of the United States, embracing biographical sketches of prominment men and a historical résumé of the progress of textile manufacture from the earliest records to the present time. Boston: James H. Lamb Company. 1916. 330-331. https://archive.org/details/lambstextileindu02brow  (accessed May 12, 2014).

Brown, John Howard. Lamb's textile industry of the United States, embracing biographical sketches of prominment men and a historical résumé of the progress of textile manufacture from the earliest records to the present time. Boston: James H. Lamb Company. 1916. 330-331. https://archive.org/stream/lambstextileindu02brow#page/330/mode/2up  (accessed May 12, 2014).