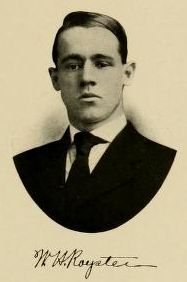 Wilbur High Royster, lawyer, merchant, and teacher, was born in Raleigh, the son of Vermont Connecticut and Hallie Lee High Royster. He attended the Morson Academy in Raleigh and was graduated from The University of North Carolina in 1907. A member of the North Carolina National Guard between 1904 and 1911, he attended the Johns Hopkins University in 1908–9 and the American School of Classical Studies in Athens, Greece, in the same year. He received the master of arts degree from Harvard University in 1911.

From 1912 to 1915 Royster was an instructor of Latin and Greek at The University of North Carolina. While there he contributed to Studies in Philology an article on the authorship and interpretation of a work attributed to Aeschylus. Leaving the university, he returned to Raleigh to manage the A. D. Royster Candy Company on Fayetteville Street, a popular Raleigh institution for many years, founded by his father. When the company was sold some years later, he studied law and became a member of the Wake County bar.

In 1913 Royster married Olivette Broadway, of Monroe, La., and they became the parents of three children: Vermont Connecticut II, Saravette, and Thomas Broadway, who was killed during World War II in the invasion of Tarawa. Royster, a Baptist, was buried in Oakwood Cemetery.