James Finch Royster, university administrator and Kenan Professor of English Philology at The University of North Carolina, was born in Raleigh, the son of Wisconsin Illinois and Mary Willis Finch Royster. The Royster family was prominent in the civic and professional life of the capital at the turn of the century, and a number of its members gained eminence in medicine, teaching, and commerce. Young "Jim," as he was affectionately called by his intimates, attended the Raleigh public schools and was graduated from Wake Forest College with an A.B. degree in 1900. At Wake Forest he had come under the influence of such teachers as Benjamin Sledd in English and William L. Poteat in the natural sciences. Among his classmates was Joseph Quincy Adams, who became a well-known Shakespeare-an scholar. 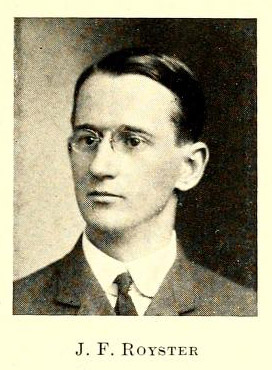 In the fall of that year Royster joined the brilliant group of young men destined to place The University of North Carolina Department of English among the leaders in the nation. Dr. Edward Kidder Graham, then head of the department, was able to bring to Chapel Hill such men as Edwin Greenlaw, Norman Foerster, James Holly Hanford, and Edwin Mims, all of whom later became influential scholars in their respective fields. President Graham later praised Royster's "virile scholarship" and "rare gifts as a teacher and executive." During his seven-year tenure on the faculty, he edited Shakespeare's Love's Labours Lost, saw the publication of his doctoral dissertation, "A Middle English Treatise on the Ten Commandments" (Studies in Philology 5 and 8), and wrote numerous popular essays on literary research, as well as several scholarly papers on philology.

In 1914 Royster joined the faculty of the University of Texas to remain for another seven years before accepting, in 1921, the Kenan Professorship of English Philology at The University of North Carolina, a post he held until his untimely death. At Texas he had continued to write, producing a three-volume series for high schools, Good English: Oral and Written (1922, 1927), and a freshman text, with Stith Thompson, Guide to Composition (1919). At Chapel Hill he was, in 1922, made dean of the College of Liberal Arts. His annual reports of the period reflect his penetrating and forward-looking views on the meaning and purpose of a liberal education. Under his direction the foundation of the major-minor system, the practice of sectionalizing students according to ability, and the introduction of the advisory system, out of which grew the General College, all had their beginnings. Sentences from his Annual Report for 1922–23 well express his educational philosophy: "If we are to demand of the student adherence to duty, the severe responsibility rests upon us of giving him something to which he may intelligently . . . apply himself. . . . There may be joy in the work if we are joyful over it, there may be belief in it if we severely believe in it. . . . The intangible and elusive, and therefore more precious, aim of a liberal education should be more clearly presented."

Upon the resignation in 1925 of Edwin Greenlaw as dean of the Graduate School, editor of Studies in Philology, and head of the Department of English, Royster was the natural choice of faculty and administration for these positions. He threw himself into the work with such abandon that his health suffered, and in 1927 he was given a leave of absence to try to regain it but the attempt was only partially successful. Under his guidance the Department of English burgeoned, adding to its illustrious faculty and increasing the number of students, both graduate and undergraduate, who flocked to the classes of such brilliant teachers as Norman Foerster, Howard Mumford Jones, and George Coffin Taylor. With his encouragement the department organized and maintained for many years the Bull's Head Bookshop (later taken over as a part of the Student Stores). Royster was also instrumental in having a dormitory set aside for graduate students. Smith Dormitory, with its spacious lounge, became during his administration a center for meetings of the Graduate Club, the Philological Club, and other societies of scholars and faculty.

As editor of Studies in Philology, Royster continued the high standards of his predecessor. Both the circulation and the reputation of the journal increased during his five-year administration. In his memory, a Royster Memorial Volume of Studies in Philology appeared in October 1931; it contained contributions by his friends and colleagues, and a dedication by Edwin Greenlaw, his predecessor and colleague, praising his contributions and his editorial services as well as his "rare power to transmit his enthusiasm to others."

In recognition of his qualities as scholar and administrator, Royster was invited, in 1929–30, to serve as director of the American University Union in London. He had barely started his work there when illness forced him to relinquish it. In November 1929 he returned to the United States, where a few months later his tragic death occurred while he was a patient at a Richmond, Va., sanatorium. He was buried in the Chapel Hill Cemetery on 23 Mar. 1930.

Royster's forceful mind, his effervescent wit, and his keen insight into the problems of his profession were a constant source of delight to his colleagues and students. "With him," as noted in his biography in The Kenan Professorships (1956), "scholarship came first, . . . good teaching was the outgrowth of scholarly activity . . . [and] he was a living example of his philosophy." Not least among his accomplishments was his development of a carefully balanced Department of English made up of brilliant individuals held together by his wise administration.

Royster married Carrie Belle Lake on 17 June 1908. They had one son, Chauncy Lake, and one daughter, Martha Ellen.