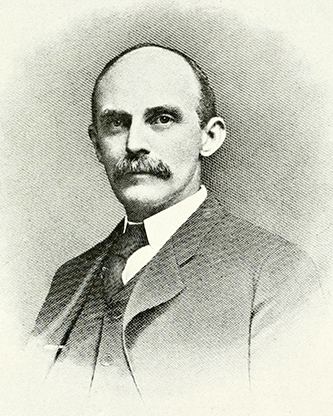 George Rountree, attorney and judge, was born in Kinston, the son of Robert Hart and Cynthia Biddle Loftin Rountree. As a ten-year-old boy he witnessed the Battle of Kinston shaping up as he rode his pony at Tower Hill. When shots were fired in his direction, he made a disorderly retreat. Rountree attended an excellent private school in Kinston and in 1873 entered the second-year class at Bethany College in West Virginia. He proved to be a good student and after two years entered Harvard College, from which he was graduated in 1877. Returning from Cambridge, he began to read law under the guidance of George V. Strong, of Raleigh, one of the outstanding lawyers of his day.

After receiving his license in 1878, Rountree opened an active practice in Kinston. After a short time, however, he moved to New York and joined the practice of Rountree and Company, established by his father in 1873. In 1884 he moved to Richmond, Va., and engaged in the wholesale shoe business. In time he settled in Kinston to form a law partnership with his uncle, Andrew J. Loftin.

In 1881 he married Meta Alexander Davis, the daughter of George Davis, of Wilmington, former attorney general of the Confederacy. In 1890 the Rountrees settled in Wilmington, where he continued to practice law until his death.

In 1898, with the Republican party virtually in complete control of state government, the racial situation in eastern North Carolina seemed unbearable to many whites. White supremacy clubs were organized in an effort to unify the whites. George Rountree was induced to run for the General Assembly and with the cooperation of many white Republicans, he was elected. In 1899 he served as chairman of the committee on constitutional reform that drafted and sponsored the so-called Grandfather Clause, which provided in substance that male citizens could vote if they could read and write or if their grandfather voted. Supporters maintained that the right to vote should be determined by character and intelligence. Although he was a key figure in the preparation, passage, and final ratification of the amendment, Rountree was said never to have been animated by hostility to blacks. Elected to a second term, he opposed in 1901 a constitutional amendment providing that all taxes paid by whites should be applied exclusively to the education of whites. At that session of the General Assembly he introduced legislation prepared by Dean Samuel F. Mordecai to codify and simplify the probate laws.

In 1899, in Raleigh, Rountree was one of the founders and charter members of the North Carolina Bar Association, and in 1906 he was elected president. He was a life member of the American Bar Association. In July 1913 he was appointed to the superior court bench by Governor Locke Craig, who had also been active in the Democratic campaign of 1898. After two years on the bench Rountree resigned and returned to his law practice in Wilmington. He was one of the counsel in the case of South Dakota v. North Carolina, which was instituted in the U.S. Supreme Court to collect some bonds issued soon after the Civil War and whose payment was contested. He devoted more than a year to preparing for the case.

Rountree possessed an outstanding legal library, which included reports of the English courts, and the study of legal principles was almost a passion with him. He often spent weeks on a single subject in striving to attain perfection. The rough-and-tumble antics sometimes seen in trial courts were distasteful to him. He was always outspoken and sometimes caustic in his remarks.

He was a member of St. James Episcopal Church in Wilmington. Bishop Thomas Wright once said that it never concerned him when Rountree looked at his watch during a sermon, but when he put the watch to his ear and shook it, he knew that it was time to end the sermon.