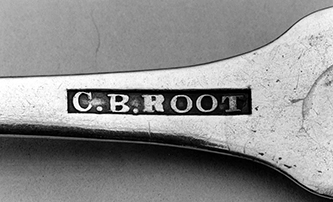 Charles Boudinot Root, silversmith, businessman, and civic leader of Raleigh, was born in Montague, Mass., the son and only surviving child of Elihu Root (1767–1869), a prominent landowner, and Sophia Gunn, daughter of Samuel Gunn, Patriot soldier in the American Revolution. He was a descendant of the Englishman Thomas Root, who settled in Hartford, Conn., in 1637 and lived there until his death in 1694. Charles was educated at the academy in Greenfield, Mass. In 1835 he went to New York, but his stay was brief. Two years later he moved to Raleigh and went into business with Bernard Dupuy, a flourishing silversmith and jeweler. Both Dupuy and Root were skilled craftsmen; a sizable number of exceptionally beautiful pieces made by both survive. Examples of their work are on display in the North Carolina Museum of History. Root acquired the business from Dupuy in 1842 and operated it successfully until he sold it in 1860.

During the first years of the Civil War Root was the acting mayor of Raleigh in the absence of the elected mayor, Captain William Harrison. After the war his principal business interest was the Raleigh Gas Company, which he served as president for eighteen years. In 1884 he was elected to the post of city tax collector, a position he held for several years. At various times during the following years Root was a magistrate, a city alderman, and chairman of the board of county commissioners. His political affiliation was with the Democratic party.

In 1847 Root married Annie Freeman Gales of Raleigh, the bond being dated 10 June. She was the daughter of Weston R. Gales and the granddaughter of Joseph Gales. There were two children who reached maturity, Love Gales (Mrs. V. E. Turner of Raleigh) and Charles, also of Raleigh.

C. B. Root was greatly esteemed by his contemporaries. His funeral was conducted at Christ Church, with interment in Oakwood Cemetery, Raleigh.

Samuel A. Ashe, Cyclopedia of Eminent and Representative Men of the Carolinas, vol. 2 (1892).