Elijah Frink Rockwell, Presbyterian minister, writer, historian, teacher, and college president, was born in Lebanon, Conn., the son of Joseph and Sarah Huntington Rockwell. He received his early education in the schools of his home community, in the town of Windham, and in Bacon Academy, Colchester, Conn. In 1829 he entered Yale but because of financial difficulties was not graduated until 1834. For a time he taught school to earn sufficient funds to complete his college course. Following his graduation he taught for a year in Monson, Mass., and then went to Fayetteville, N.C., to teach in the Donaldson Academy.

In 1837, as a candidate for the ministry under the guidance of the Fayetteville Presbytery, he entered Princeton Theological Seminary. Finding the winter climate unsuitable, however, he transferred to Columbia Seminary in South Carolina. Although listed as a member of the class of 1840, he left the seminary in the spring of 1839. In June 1839 he was licensed by the Fayetteville Presbytery. After supplying the Fayetteville church for a brief time, Rockwell went to Statesville, in the fall of 1840, as supply for the Presbyterian church. Upon being called as pastor, he was ordained and installed by the presbytery of Concord on 15 Dec. 1841. 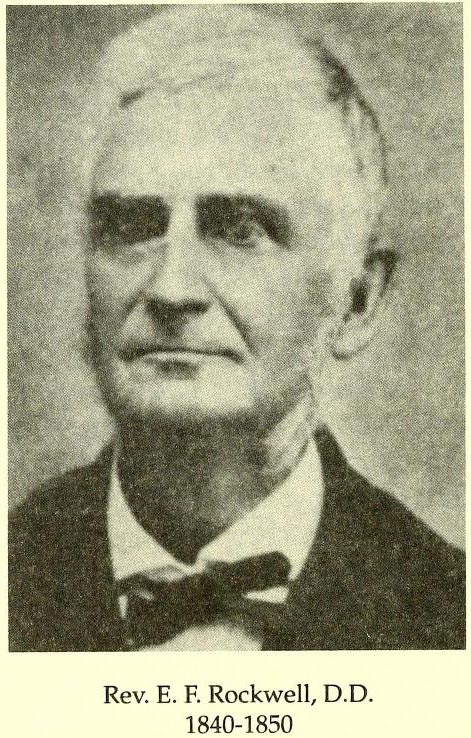 During the Concord pastorate he helped raise money for Davidson College, where in 1850 he was elected professor of chemistry and natural philosophy. In 1852 he became professor of chemistry and geology and in 1854, professor of Latin and modern history, a chair he filled until 1868. One of his students wrote: "His learning was varied, extensive, and curious; his mind a repository of unexpected and unusual knowledge. . . . He was a man of deep scriptural piety, unaffected, unobtrusive, undemonstrative." Another commented: "He was not magnetic, but an accomplished Latinist, a good teacher and a kindly man." Rockwell collected many minerals, which he gave to the college for its museum; in 1921 this collection was destroyed in a fire that devastated the main building on the campus. He also offered the first prize ever given at Davidson in 1860, and he donated one hundred dollars, the interest from it to be given in money or books to the student making the highest grades in science. While teaching he wrote innumerable articles on a variety of subjects that were published in various magazines and newspapers. His presbyterial biographer, the Reverend Jethro Rumple, D.D., said that he wrote "in all about one hundred important articles besides numerous little contributions upon current events."

In addition to his writings on theology, natural history, and linguistics, Rockwell was the author of a number of historical papers. Several of these dealt with the history of local churches, others with events that occurred during the Revolutionary War, and still others with prominent men of that period and of later years who contributed to the moral and social life of the South.

In 1868 Rockwell was elected president of the Concord Female College, where he had been one of its trustees from its beginning. He returned to Statesville to serve in this post, but the aftermath of the Civil War precluded a successful administration. Enrollment was low and money was scarce, handicaps that the new leader could not overcome. In 1870 the college was closed and a little later sold; thus, for a time, it passed out of the control of the presbytery that had founded it.

Rockwell taught briefly in the Statesville Academy for Boys but soon began supplying churches in the area. In 1871 or 1872 he left the academy and devoted his full time to preaching. He supplied Third Creek, Bethany, Bethesda, Fifth Creek, Unity, and Tabor churches. In 1882 he received the honorary doctor of divinity degree from The University of North Carolina. During the last few years of his active ministry he was stated supply of Bethany and Tabor churches. Ill health forced his retirement to his home in the Cool Springs community, near Fifth Creek Church, where he died. Funeral services were held at both the Fifth Creek and Statesville Presbyterian churches. Although his will requested that he be buried in the Bethany graveyard, his body was carried from the Statesville church to the Fourth Creek cemetery. On 31 Dec. 1888 his remains were disinterred and transferred to Oakwood Cemetery, which had recently been opened in Statesville. His final burial was in Lot 8, Section 4, which had been bought by his widow shortly after the new city cemetery became available.

Rockwell's first wife was Margaret K. McNeill, of Fayetteville, who died about 1866. His second wife was Elizabeth Holmes Browne, also a native of Fayetteville, who was living in Davidson at the time of their marriage in 1868. To this second union were born two sons, Douglass Browne, who died in infancy, and Joseph Huntington, who was given his paternal grandmother's family name. He also had an adopted son, George Rockwell McNeill, a relative of his first wife.

Alfred Nevin, Encyclopedia of the Presbyterian Church in the U.S.A. (1884).

Presbyterian Church in the USA, Synod of North Carolina, Minutes (1888).

Foote, William Henry. Sketches of North Carolina, Historical and Biographical: Illustrative of the principles of a portion of her early settlers. 1846. https://archive.org/details/sketchesnorthca02footgoog (accessed August 31, 2014).

Rockwell, E.F. (Elijah Frink). Centennial addresses on the life and character of Rev. James Hall, D.D.: and short sketches of the ministers of the Gospel who have descended from James and Prudence Hall. Covington, Ten..: Tipton Record Power Presses. 1885. https://archive.org/details/centennialaddres00rock (accessed August 28, 2014).