William Olin Puckett, educator and biologist, was born in Cornelius, the son of William Lawrence and Mary Alice Washam Puckett. His family was of English, German, and Scottish descent and his earliest American ancestors arrived in Jamestown, Va., in 1619. Puckett was graduated as valedictorian of his class at Cornelius High School in 1923 and enrolled at nearby Davidson College, where he was an instructor of biology and was awarded a bachelor of arts degree in 1927. After receiving the master of arts degree from The University of North Carolina in 1931, he entered graduate school at Princeton University and served as a teaching Fellow; he received the master of arts and doctor of philosophy degrees in biology in 1934. 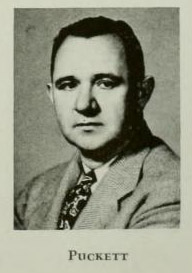 Puckett accepted a position as assistant professor of biology at Southwestern College, Memphis, Tenn., in 1935 but returned to Princeton later in the year. Puckett remained at Princeton for eleven years—as an instructor in biology (1935–40) and then assistant professor (1940–46). During World War II he was a research investigator for the Office of Scientific Research and Development, where he conducted significant studies in weapon trauma from 1943 to 1945. While at Princeton, Puckett quickly established his reputation as an authority in the science of vertebrate embryology and pioneered in the use of plastics to preserve biological specimens for study.

In 1946 he returned to Davidson College as chairman of the Department of Biology, a post he held until his retirement in 1971. Through his energetic leadership and teaching, he molded Davidson College into one of the foremost schools in the United States in premedical education. During his appointment as chairman of premedical studies and R. J. Reynolds Professor of Biology, Puckett taught and guided over 1,300 students to careers in medicine and influenced others to pursue research and teaching positions in the biological sciences. In recognition of his excellence in the field of biomedical education, he received the Thomas Jefferson Award in 1966 and was honored posthumously in the establishment of the W. Olin Puckett professorship in biology at Davidson College.

In addition to his educational work, Puckett engaged in research and published over forty articles dealing with his studies in embryology, comparative anatomy, radiation biology, endocrinology, and trauma. His work in developing transparent plastic preservatives for biological specimens represents one of his many lasting contributions to the science of zoology. As a member of the American Council on Education, Puckett was instrumental in preparing the critical 1954 report calling for increased funding and expansion of basic research in the United States during the decades following World War II and the Korean War. He was a member of the American Society of Zoologists, the American Association of Anatomists, Sigma Xi, Gamma Sigma Epsilon, Omicron Delta Kappa, and Sigma Chi and was elected president of the North Carolina Academy of Science in 1954. Puckett served as a ruling elder of the Davidson Presbyterian Church from 1958 to 1972.

He married Virginia Lewis House on 18 June 1942, and they were the parents of three children: Virginia Northington, John Lawrence, and James Butler. Puckett died in Huntersville and was buried in Mimosa Cemetery, Davidson.