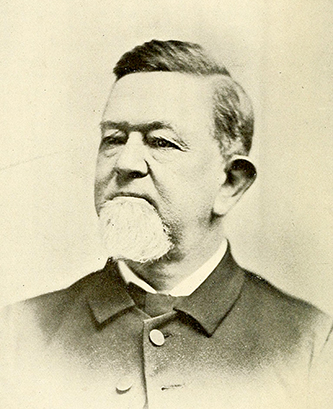 Thomas Henderson Pritchard, Baptist pastor and college president, was born in Charlotte, the son of Joseph Price and Eliza Hunter Henderson Pritchard. His father was a Baptist minister and a native of Charleston, S.C.; his mother was the daughter of Dr. Samuel and Margaret Dinkins Henderson of Mecklenburg County. After a short time the family moved to Mocksville, where young Tom attended the Mocksville Academy and was prepared for college by the Reverend Baxter Clegg, a Methodist minister. Pritchard was adopted by a wealthy bachelor uncle, Dr. William Davis Henderson, who sent him to Wake Forest College at age seventeen.

After Pritchard's second year of college Henderson married and left any further education up to his nephew. Pritchard left college at the end of his sophomore year and taught school in Nash County to enable him to return to Wake Forest. He then borrowed money and continued his education. While at Wake Forest College, Pritchard was president of the Philomathesian Literary Society (1853–54). A contemporary described him as a young man "bringing the joyfulness and energy of abounding health, and gracious manners, the uplifting influence of noble ambitions, literary tastes, with a readiness and fluency of speech which came to him by inheritance, and an optimism which clung to him." Pritchard had intended to study law but a revival at the college changed his whole life. He was baptized on 9 Sept. 1849 and soon after was licensed by the Wake Forest Baptist Church to preach. He received the B.A. degree from Wake Forest in 1854. The board of the college then elected him to act as publicity agent for the college to stimulate interest in higher education for Baptist boys and to solicit scholarships and donations for the college.

After a year of traveling over the state as agent of the college, Pritchard decided that he wanted to return to the ministry. The Baptist church in Hertford, where he was living, requested his ordination. He was ordained as a minister on 9 Dec. 1855 and was immediately elected pastor of the Hertford Baptist Church, where he taught and preached for three years, earning enough to pay off the debts incurred in college. In 1858 Pritchard moved to Charlottesville, Va., and entered the University of Virginia to read theology with Dr. John A. Broadus. During the next year he supplied the pulpit of Dr. William F. Broaddus in Fredericksburg, Va., and in January 1860 he became pastor of Franklin Square Baptist Church in Baltimore, where he remained until July 1863, when he was imprisoned after an attempt to go South.

When he returned to North Carolina, Pritchard was appointed chaplain and colporteur to Gordon's Corps of the Army of Northern Virginia. He preached to the troops and was involved in the "Great Revival" that swept over the Confederate army in 1863. From the end of that year until June 1865, he filled the pulpit of the First Baptist Church of Raleigh in the absence of its pastor. In July 1865 he was called to the pastorate of the First Baptist Church of Petersburg, Va. He returned to the First Baptist Church, Raleigh, in February 1868. After eleven years, during which his congregation grew in membership from 240 to 515, he was elected president of Wake Forest College.

Pritchard was a trustee of The University of North Carolina, the Southern Baptist Theological Seminary, Louisville, Ky., and Wake Forest College. He served as chairman of the Board of Missions of the Baptist State Convention of North Carolina for seven years. He was associate editor of the Biblical Recorder and a frequent contributor to the Recorder, Charity and Children, The Student, and other publications. He was the author of a small book on infant baptism in 1871 and an enlarged edition in 1876. He prepared biographical sketches of North Carolina Baptists for Cathcart's Baptist Encyclopedia. Throughout life he was an ardent spokesman for education, and while in Raleigh he lent his talents to assist in the establishment of a college for agriculture and mechanics (now North Carolina State University). The University of North Carolina presented him with the D.D. degree in 1868.

Pritchard died at the home of his son in New York City. His remains were taken to Charlotte, where a memorial service, attended by Baptist dignitaries and others, was held in the Tryon Street (now First) Baptist Church. After one of the largest funeral processions up to that time, Pritchard was buried in Elmwood Cemetery.