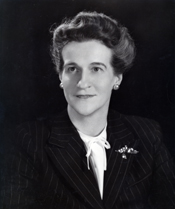 Eliza Jane Pratt, newspaper editor, congressional staff assistant, and member of the U.S. House of Representatives, was born in Morven, Anson County, one of seven children of James L., a farmer, and Lena Valetta Little Pratt. She attended public school in Morven until age nine, when her family moved to Raeford. In the fall of 1918 she transferred to Queens College from the Asheville Normal and Collegiate Institute. She remained at Queens for two years, leaving without a degree when her father became ill.

In 1923, as editor of the weekly Troy newspaper, the Montgomerian , Eliza Pratt met Eighth District congressman William C. Hammer while covering his speech in Candor during the town's peach festival. Hammer soon offered her a position in Washington as his administrative assistant. Beginning in 1924 she worked as staff assistant to Hammer and eventually for four other congressmen from the Eighth District.

Representative William O. Burgin, for whom Miss Pratt worked, died in April 1946 and the North Carolina Democratic Executive Committee nominated her in the special election to fill Burgin's term. During the five-week campaign that followed she paid all of her own expenses and was easily elected on 25 May 1946 as representative from the Eighth Congressional District. She was appointed to three committees: Pensions, Territories, and Flood Control. Congress adjourned in late summer and she was not a candidate for reelection, probably because of the illness and subsequent death of her mother.

From 1947 to 1951 she worked in the Office of Alien Property in Washington and from then until 1954 in the Department of Agriculture. In the latter year she joined the staff of the Library of Congress, where she remained through 1956. From 1957 to 1962 she was assistant to Representative A. Paul Kitchin from North Carolina's Eighth District. Returning to Anson County in 1963, she lived in Wadesboro, where she worked as director of public relations for the North Carolina Telephone Company for several years and remained active in Democratic politics.

Eliza Pratt lived during a period when women often set aside personal and professional goals to devote time and energy to their family. Although her public service was noteworthy, the needs of her parents and her devotion to them restricted her professional career. She died in Mercy Hospital, Charlotte, and was buried in the Raeford City Cemetery.

I knew Ms Pratt as she was a

I knew Ms Pratt as she was a friend of my Grandmother. (my Grandmother was married to Mary Louse Medley's brother, Joe F Medley) Made me so proud to see this post and the Anson Co. information. I am a child of Anson and wear the 'badge' proudly!