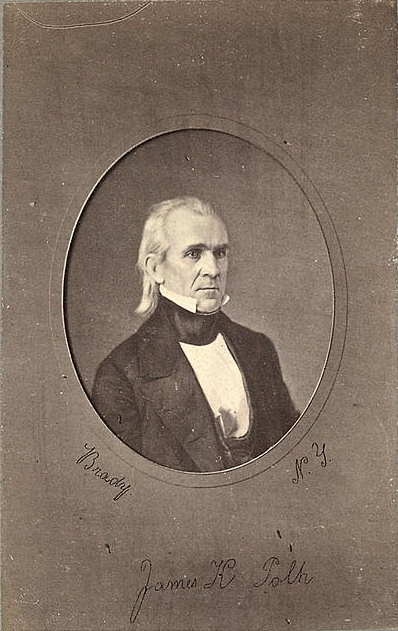 James Knox Polk followed a career path which was blazed by Andrew Jackson. Both men hailed from southwestern North Carolina. Both migrated to Tennessee, where they practiced law and entered politics, and both were elected president of the United States. As similar as their paths were, James Polk was a different personality from his fiery predecessor. His life and career were marked by a relentless pursuit of his goals instead of the dramatic aura that perpetually surrounded Jackson. The effects of Polk's presidency, however, were more dramatic upon the nation.

James Knox Polk was born on his family farm in Mecklenburg County, North Carolina, in 1795. The oldest of ten children, Polk suffered from poor health. In spite of his less than robust stamina, Polk moved west into Tennessee with his family where they settled on land purchased from Polk's grandfather. Polk developed severe gallstones, which were surgically removed in a risky procedure at that time. Without the benefit of modern technology, sterilization, or anesthesia, Polk remarkably survived the surgery. During these early years, his education was informal until 1813 when he enrolled in a Presbyterian school in Columbia. Polk soon transferred to a more challenging school and in 1816 returned to North Carolina to attend the University in Chapel Hill. The future president excelled at the University of North Carolina, graduating with honors in 1818.

Returning to Tennessee in 1819, Polk took up the study of law and was admitted to the bar the following year. Polk attained his first political post in 1823, winning election to the Tennessee House of Representatives. He became engaged during this same year and in 1824 married Sarah Childress, whom he had met in school before attending the University of North Carolina. Polk served in the Tennessee House from 1823 until 1825 during which time he supported Andrew Jackson's bid for the U.S. Senate seat from Tennessee. He continued to support Jackson while serving in the U.S. House of Representatives from 1825 to 1839. Polk served as Speaker of the House for the last four years of this term. Polk won election as governor of Tennessee in 1839 but lost the gubernatorial election of 1841 and again in 1843. During these times of holding political office, "Young Hickory" followed Jackson's lead supporting the "common man" and lower taxes and attacking the Bank of the United States and federal surpluses.

Polk attended the 1844 Democratic Party convention as a supporter of President Martin Van Buren. Van Buren was the likely choice for the party nomination with Polk the favored choice for the vice-presidential nomination. Van Buren failed to gain the two-thirds majority vote required for the nomination on the first vote, and other contenders gained more votes in the subsequent balloting. Polk received one delegate vote for the presidential nomination during the eighth round of voting, and won the nomination with 233 votes in the next round making him the first dark-horse candidate to win his party's nomination.

The 1844 campaign centered upon the annexation of Texas and the re-occupation of Oregon. Conflict over the issue of slavery continued to strain the politics of the nation and directly affected the 1844 election. A national feeling of "Manifest Destiny," the belief that the United States should span the continent from the Atlantic to the Pacific Oceans, also spurred political debate. The territory now known as Texas was part of a disputed boundary between the United States and Mexico in 1844. The issue of annexing Texas raised not only the question of war with Mexico, but also the issue of whether Texas would be a free state or slave state. The Oregon Territory was claimed by both the United States and Great Britain. Polk's campaign slogan of "Fifty-four Forty or Fight!" refers to the latitude coordinates of the disputed territory. Polk endorsed both the annexation of Texas and American control of the entire Oregon Territory. Polk also promised if elected not to seek a second term. A third candidate, James G. Birney, ran in the 1844 election extensively as an abolitionist. Birney's presence in the election captured votes which Clay needed. In the election, Polk defeated Clay and Birney to become the eleventh president of the United States.

Polk's administration lived up to its campaign promises. In 1846 Polk reached an agreement with Great Britain over the disputed Oregon Territories. While the treaty did not provide the full territory to the United States, the area that is now the states of Washington and Oregon was formally placed under the control of the United States. The issue of Texas was not solved as peacefully. In the Texas debate America wanted to establish the southern border of the nation at the Rio Grande while Mexico favored the Nueces River for the national boundary. In 1845 Polk sent federal emissaries to offer compensation for the disputed area of Texas as well as the territories of New Mexico and California. When the Mexican government rejected the offer, Polk sent troops under General Zachary Taylor into the Texas Territory. Mexican troops attacked Taylor's force, and Polk claimed this action as a provocation of war. Congress approved Polk's decision, and the U.S.-Mexican War began. The decision to go to war was not unanimous. Some legislators, including Representative Abraham Lincoln, felt that the Mexican War would be used as a tool to spread slavery into new states and territories in the west. After a year and a half of fighting, and another 6 months of civil unrest and negotiation, the combatants signed the Treaty of Guadalupe Hidalgo on February 2, 1848, ending the Mexican War. Polk remained true to his campaign promise and did not seek a second term as president, retiring from office in 1849. During Polk's presidency, the United States attained the desire of Manifest Destiny. The nation now controlled the land between the two oceans. The states of Texas, Iowa, and Wisconsin were admitted to the Union during Polk's term of office. It was also under Polk's presidency that the United States Naval Academy in Annapolis, Maryland was established. The issue of slavery, especially in the newly acquired lands, continued to haunt the country, and Polk's administration did little to soothe the turmoil.

After the conclusion of his term in office, James Polk purchased a home, renamed Polk Place, in Nashville, Tennessee. The former president planned to retire there after a tour of the South. After traveling down the Atlantic seacoast and along the Gulf of Mexico, Polk returned to Nashville in ill health. He died in his home in Nashville on June 15, 1849, three months after departing the White House. Polk's dedication to his goal enabled him to overcome his physical frailty. A dedicated student and public servant, Polk carried his determination and energy to the presidency where his talents greatly increased the size of the nation. James Polk began his journey to greatness in the land "where the weak grow strong, and the strong grow great", North Carolina.