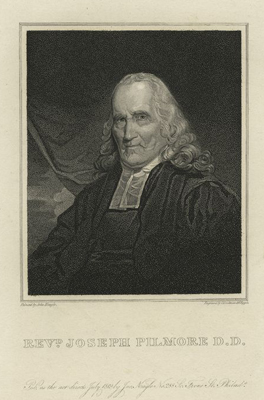 Joseph (or Pillmore Pilmore, Pilmoor, clergyman, was born in Tadmouth, Yorkshire, England, to parents who were members of the Church of England. At sixteen he became acquainted with John Wesley (1703–91), founder of the Methodist church, and was converted under his influence; he was educated at Wesley's Kingswood School near Bristol and acquired some knowledge of Latin, Greek, and Hebrew. His early itinerant ministry was in Wales and Cornwall.

In 1769 at the Methodist Conference at Leeds, Pilmore and Richard Boardman volunteered for missionary work in the American colonies and arrived at Gloucester Point, N.J., on 21 Oct. 1769. Until May 1772 the two men alternated in preaching in Philadelphia and New York for four-month periods; on 26 May 1772 Pilmore left on a journey that was to take him to Georgia. He traveled through the German counties of Pennsylvania and the northern counties of Maryland to Baltimore, Annapolis, Norfolk, Portsmouth, Williamsburg, and Yorktown. In December 1772 he preached the first real Methodist sermon ever delivered in North Carolina at Currituck Court House and realized the "unparalleled opportunities" open to the Christian evangelists in these places. He also visited Edenton, New Bern, and Wilmington. His ministry in each place was brief but excellent. After reaching Savannah, Ga., in February 1773 and staying eleven days, he returned to Philadelphia over the same route. In January 1774 Pilmore and Boardman returned to England.

The years 1774 through 1784 were "silent years" for Pilmore; he received no Methodist appointments and was stationed at London, Norwich Circuit, Edinburgh, Dublin, Nottingham, Edinburgh, and York. Then, returning to America, he was ordained a deacon and priest of the new Protestant Episcopal church in the United States on 27 and 29 November 1785. The remaining years of his ministry, until retirement from the rectorate in 1821, were spent in Philadelphia, Oxford (now Lawndale), and Lower Dublin (now Torresdale). His body was interred in a 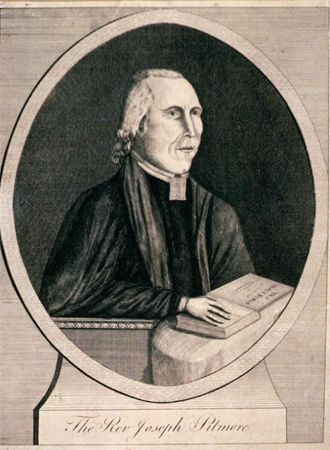 vault beneath the floor of the Sunday school room of St. Paul's Church, Philadelphia.

Pilmore served as vice-president of the Philadelphia Bible Society and of the Society of the Protestant Episcopal Church for the Advancement of Christianity in Pennsylvania. In 1807 the University of Pennsylvania awarded him the honorary doctor of divinity degree. In 1790 Pilmore married Mary Benezet Wood, formerly of Georgia; some writers state that he married twice; however, there appears to be no extant record of the name of a second wife.

The Journal of Joseph Pilmore: Methodist Itinerant, For the Years August 1, 1769 to January 2, 1774 was edited by the Reverend Frederick E. Maser and Howard T. Maag and published for the first time in 1969 by the Historical Society of the Philadelphia Annual Conference of the United Methodist church. At the order of the Society of the Sons of St. George's, Philadelphia, John Neagle painted a portrait of Pilmore that was loaned to St. George's United Methodist Church, Philadelphia. The Joseph Pilmore Bicentennial Celebration was held at Currituck Court House in September 1972 with Frederick E. Maser and others as principal speakers under the sponsorship of the Commission on Archives and History of the North Carolina Annual Conference of the United Methodist church. The Pilmoor Memorial United Methodist Church is located in the Elizabeth City district of the denomination.

Louise T. Stahl, Lest We Forget (no date).