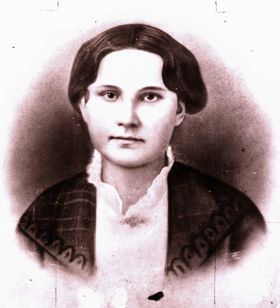 Emeline Jamison Pigott, Confederate spy, was born in Carteret County, the daughter of Levi and Eliza Dennis Pigott, both from families with roots deep in the area. At the time of the Civil War, the Pigotts lived on a farm along Calico Creek directly across from the present Morehead City cemetery. The site then served as a camping ground for Confederate soldiers, and Emeline saw at close hand the hardships the soldiers faced. She quickly became involved in the Southern cause.

She fell in love with Stokes MacRae, a private, and refused many invitations from Confederate officers for social affairs he could not attend. There still exists an invitation sent to her for a New Year's Eve ball to be held in Beaufort by the Twenty-sixth Regiment of North Carolina Troops in 1861. MacRae was killed in the Battle of Gettysburg, and his body was never identified. After his death, Emeline became even more active in war service. She nursed the sick and injured and was in New Bern when the town fell. She left on the last train and spent an extended period in Kinston as a nurse until she had to leave that community, too. She then went to Concord, where she became friendly with a Mrs. Brett, the widow of a chaplain of the Northern army. The two women worked their way through Union lines, sometimes on foot and sometimes by cart, until they reached the Pigott farm. Mrs. Brett made her home there and later married a family relative.

When Northern soldiers were stationed on the Pigott farm, it became the task of Emeline to entertain the officers in the evenings so that her brother-in-law, Rufus Bell, could carry food to Southern soldiers who were hiding in the woods nearby. She also served as a courier, taking medicine, food, and mail to predetermined drop points for the Southern forces to pick up. Emeline hid the provisions under her hoop skirt. 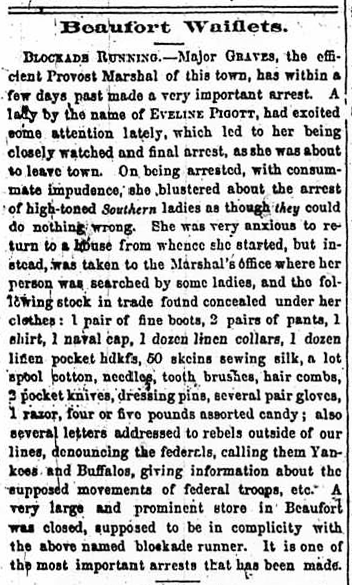 Once she was arrested in Beaufort while attempting to take war information to the Southern troops. Actually, the information had been planted because the Northern authorities suspected Emeline's activities. She was traveling with her brother-in-law, and he was searched first for the incriminating documents the pair was suspected of carrying. When authorities found nothing, they sent a black woman to search Emeline. In an effort to gain time, she refused to allow the black woman to search her and insisted that a white woman whom she knew be found. By the time the white woman arrived, Emeline had swallowed the incriminating evidence and torn all the mail to bits so that it could not be read.

She was taken to prison in New Bern but was allowed to spend a night at home on the way, and the authorities even permitted her cousin, Mrs. Levi Woodburg Pigott, to accompany her. She was incarcerated for about a month, and conditions at the prison were very bad. One night, an attempt was made to kill the two women by pouring chloroform into their room. Fortunately, Emeline was awake, and she and her cousin took turns breathing through a broken window pane until the fumes dissipated. Finally, they were able to get the attention of a guard stationed outside who gave them aid.

For unexplained reasons, Emeline was never brought to trial, although she was taken to court day after day. If she had been tried, she probably would have been sentenced to death as a spy. After the attempt on her life, she sent for the two men in Beaufort who had given her the false information that led to her arrest. She told them that if she died in prison, they would die too, and that threat led the men to arrange her release. She was never arrested again, although she was watched closely and her home was searched repeatedly. Emeline continued to help the Confederate cause in every way she could.

Lucy Worth London, North Carolina Women of the Confederacy (1928).

Mildred Wallace, "The Sacrifice or Daring of a Southern Woman During the War Between the States," Benjamin Royal Papers (Southern Historical Collection, University of North Carolina, Chapel Hill).