Albert James Pickett, planter and historian, was born in Anson County, the youngest of three children of Colonel William Raiford and France Dickson Pickett. The Pickett family, of Scottish, English, and French origin, was prominent in the politics and military annals of Virginia and North Carolina from colonial times. Colonel William Pickett was sheriff and tax assessor-collector of Anson County and served his district in the state legislature. In 1818 he settled at Autauga, Ala., where he became a cotton planter and operator of trading posts in Creek Indian country. He also served with distinction in both houses of the Alabama legislature.

Growing up in a frontier environment, with Creeks and Indian traders as his closest companions, young Pickett had little opportunity locally for formal education. For two years, however, he attended private academies in Massachusetts and Virginia and for a brief period in 1830 read law in the office of his brother, William, a magistrate of the Sixth Judicial District of Alabama. Not finding the legal profession to his liking, Pickett abandoned his studies and for several years tried his hand as a journalist. He worked on various newspapers, including the Alabama Journal, which was owned by his brother-in-law, General Mosely Baker. 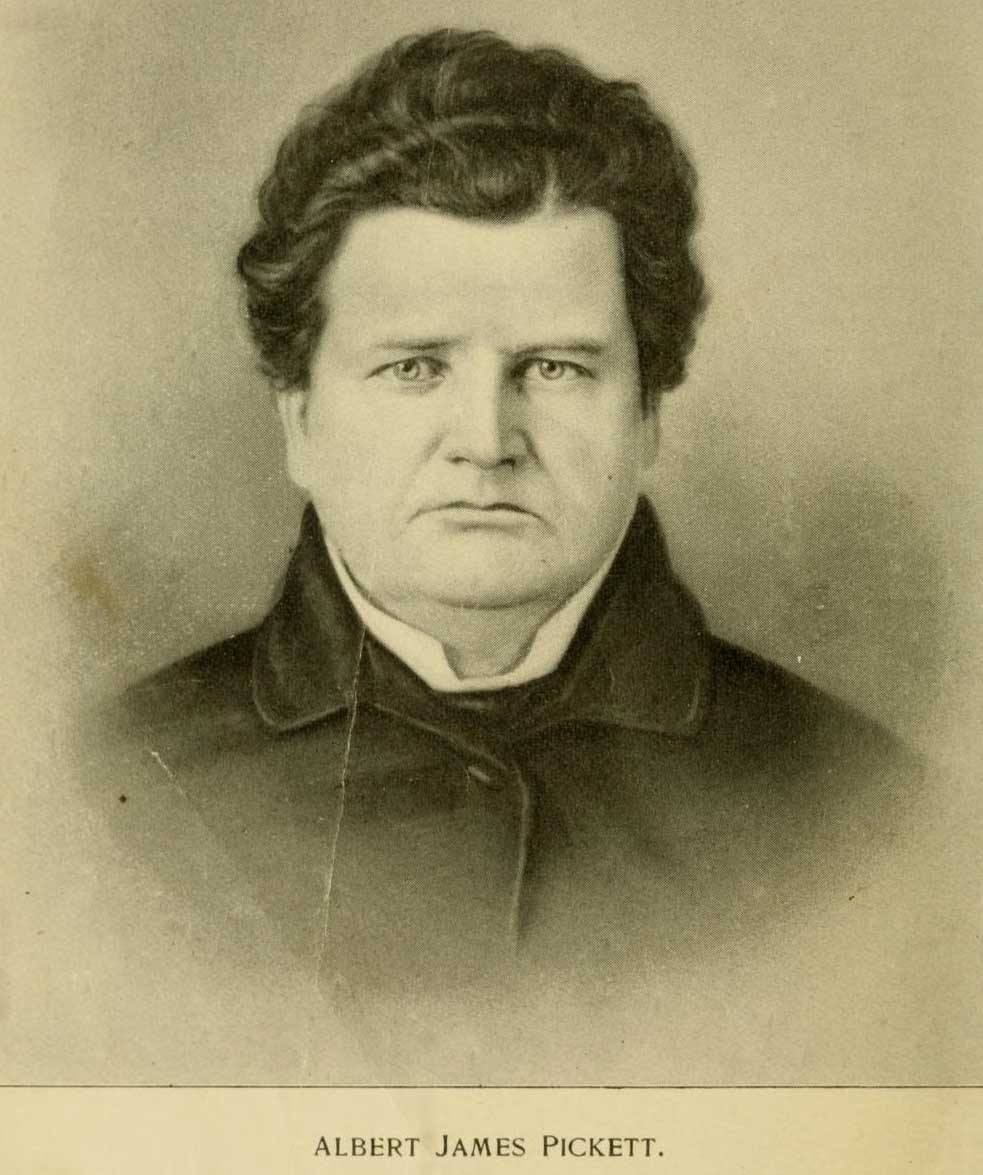 In 1832 Pickett married Sarah Smith Harris, daughter of William Harris, a leading planter. Sarah's dowry was an estate of 1,100 acres known as Forest Farm. The couple settled there and developed the land into a fine cotton plantation and home for their twelve children. Pickett immersed himself in the manifold tasks of plantation management. He diversified his crops to include dairy and vegetable products and rice and experimented with new strains of plants. One of the first Alabama planters to practice scientific farming, he wrote articles for the Southern Cultivator and other agricultural journals.

An intelligent man of stocky build and a stern visage that belied a jovial personality, Pickett was highly respected by his neighbors and was called upon frequently to assume leadership roles in civic affairs. Deeply concerned with economic matters and with free public education, he maintained an extensive correspondence with local officials across the state. Although he took the lead in opposing abolitionist sentiment in Alabama, Pickett worked to secure passage of bills designed to prevent the importation of additional slaves. A lifelong Jacksonian Democrat, he spoke at patriotic rallies against the Nullifiers. At the time of the expulsion of the Creeks, he served as acting assistant adjutant general to Governor Clement C. Clay. In 1853 Pickett was proposed as a candidate for governor, but he declined the honor in order to devote his energies to his plantation and his writing.

Pickett is remembered chiefly as a major southern historian, as a founder of the Alabama Historical Society, and as the collector of important manuscripts essential to research in the history of the Gulf states. His principal work, published in 1851, was the History of Alabama. Essentially an account of the evolution of Alabama from Hernando de Soto's expedition in 1538 to statehood in 1819, the book stressed frontier developments and military annals. Although poorly organized and written in an awkward style, the work was remarkably free of bias, even when Pickett dealt with controversial subjects. It was based on sound research in manuscript sources and on personal reminiscences dictated to the author by pioneer settlers. More than a century after publication, Pickett's History of Alabama is still the starting place for research in the colonial and territorial history of Alabama.

Although plagued by chronic ill health, Pickett labored at additional historical writings. A massive history of the Southwest was well under way when he died suddenly while on a visit to his plantation. He was buried in Oakwood Cemetery, Montgomery, Ala.

Albert James Pickett, History of Alabama and Incidentally of Georgia and Mississippi, from the Earliest Period (1896 [portrait]) and "The Red Lands of Alabama," Southern Cultivator 5 (January, June 1847).

Pickett, Albert James. History of Alabama and incidentally of Georgia and Mississippi, from the earliest period. Sheffield, Ala., Republished by R. C. Randolph. 1896. https://archive.org/stream/historyofalabama03pick#page/n5/mode/2up (September 22, 2014).