John Kenneth Pfohl, was the 229th bishop of the worldwide Moravian church and the 167th bishop of the Renewed Moravian church. For thirty-one years he proclaimed "The Lord is Risen" to open the Easter sunrise service of the Home Moravian Church in Winston-Salem, to which the congregation waiting outside in Salem Square responded, "The Lord is risen, indeed." The services were first carried by the local radio station, WSJS, in 1932, then by CBS and NBC radio networks; they were subsequently sent overseas by the Voice of America and during World War II the broadcasts were heard by America's armed forces. At one time, more people heard the sunrise services than any other religious service in the world.

Bishop John Kenneth Pfohl was "a son of the Moravian Church." His ancestry went back to the founding days of the Ancient Unitas Fratrum (Unity of Brethren of Bohemia), and his forebears in the Renewed Unity were largely engaged in the service of the church. Two great-great-grandfathers were ministers; one of them was a missionary to the West Indies. Two great-grandfathers were ministers in the Wachovia Tract—the first settlement of the Moravians in North Carolina. His grandfather was a minister as well as the treasurer of Salem Congregation, where his father was an elder for twenty-three years. 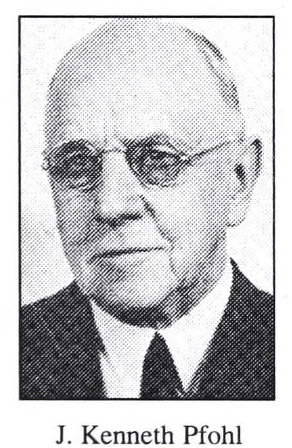 John Kenneth was the fifth child of six born to Christian Thomas and Margaret Siewers Pfohl. He attended Aunt Sophia Pfohl's School, Salem Boys School, and Moravian College; he received an A.B. degree from The University of North Carolina in 1898 and a B.D. degree from the Moravian Theological Seminary at Bethlehem, Pa., in 1900. Pfohl's first service to the church was as a teacher. He was the first principal of Clemmons School, which opened in October 1900. While there he met Bessie (Harriet Elizabeth) Whittington, of East Bend, who was the music teacher for the lower grades. They were married on 21 Aug. 1901, and she immediately joined him in his work for the church. During this period he also was ordained a deacon of the Moravian church on 15 Sept. 1901 by Bishop Edward Rondthaler. In July 1903 he received his first pastorate, at Christ Church in Salem, where he served for a little more than five years; he was ordained a presbyter at the Triennial Provincial Synod of 1905 by Bishop Rondthaler. On 1 Nov. 1908 he was transferred to the Home Church, where he served as pastor for almost twenty-six years.

In 1912 Pfohl began to hold dinner meetings in his home to which he invited community leaders from the two neighboring towns and the participants formed the Cosmos Club, which provided the impetus for the consolidation of Winston and Salem in 1913. In 1914 he was a delegate to the General Synod at Herrnhut, Germany. In 1922 he attended the Unity Conference and took part in its important postwar deliberations.

He was elected to the Southern Provincial Elders' Conference in 1920 and succeeded Bishop Rondthaler as president in 1929, thereby making him chairman of all the Provincial boards. After Rondthaler's death, a special Provincial Synod was held on 14 Apr. 1931, and Pfohl was elected bishop on the first ballot. He was consecrated on 26 Apr. 1931. On 2 May of the same year he became the pastor of Salem Congregation. He attended the General Synod of 1931 as bishop and as delegate of the Southern Province of the Moravian church. During much of World War II, with the church's Continental Province unable to function, Bishop Pfohl was the actual executive head of the worldwide Moravian church. When the Foreign Missionary Society of the Moravian Church, South, was formed on 29 Apr. 1923, Pfohl became its first president, a position he held until 1935, when Dr. Edmund Schwarze took over.

In November 1953, at age seventy-nine and after having served for twenty-four years as president of the Provincial Elders' Conference of the Southern Province, Pfohl asked to be relieved of that office. He expressed a "hope and purpose to continue" serving the church, including performing his duties as senior pastor of Salem Congregation.

For forty-five years Bishop and Mrs. Pfohl hosted a New Year's Vespers in their home for all Moravian ministers and their wives from the Southern Province; they held their last vespers in 1964. As much a tradition as the Easter sunrise service for Pfohl were the annual love feasts for employees and trainees of Goodwill Industries. He conducted them for thirty years, missing his first one in 1965 because of a broken hip. The bishop believed that the church should be a powerful influence in the community—and he used his office to see that it was. In the 1940s and 1950s it was widely accepted that community projects had to be cleared first with the mayor of Winston-Salem, then with Pfohl, and finally with the people. Told about this, the bishop laughed and said, "Thank the Lord someone has to feel they must consult God's church. As long as they come to me, we will do our best to guide them correctly." His acceptance by all areas of the community was reflected in an introduction by a Jewish merchant ("Here, I want you to meet our Bishop") and by the honorary D.D. conferred on him in June 1966 by Wake Forest University, a Baptist institution.

To be opposed to Bishop Pfohl on a public question was, according to an old friend, "an invigorating intellectual experience." He had a great love for his state and spoke appreciatively of the fact that at one time he was the oldest living alumnus of The University of North Carolina. Pfohl also loved history—both the history of the church and the history of Salem. In answer to the complaint that the Moravian church was the "hard-to-understand" church, he wrote an eight-page pamphlet in which he packed a brief history of the church, what the church stood for, and its distinguishing characteristics. One minister reported, "Those eight pages reached more people for the Moravian Church than a thousand sermons." From it grew the book The Moravian Church: Yesterday and Today (1926), of which he was coauthor with Dr. Adelaide L. Fries, archivist of the Moravian Church, South. As senior pastor of the Salem Congregation he wrote the annual "Memorabilia" delivered on New Year's recounting the principal events of the past year.

Possessing an almost photographic memory, he could recite unbelievable portions of Scriptures flawlessly. Music was also a vital part of his life, and he had a rich, baritone voice that he used not only for preaching but also for singing God's praise. In his early years he often ended a morning sermon with a solo. Music often brought the Pfohl family together in his home and he played the flute at musical gatherings. He had a wonderful sense of humor and a joyous quality to his laughter. All who knew him remember "the twinkle in his eye and the wink he gave to a point that hit home." This humor enabled him as an administrator to relieve tense situations as well as "marked the down-to-earth humanity of this great saint of God."

At age ninety-three Bishop Pfohl died at his home just a short walk from the entrance of God's Acre, the Moravian graveyard, where he was buried. His portrait, painted by Otto John Hershel, was presented by the artist on 5 May 1946 to the Home Moravian Church to hang in the church office. Pfohl and his wife, who died on 23 Nov. 1971, had six children: Margaret Elizabeth (Mrs. Edmund Campbell) of Arlington, Va.; Mary Dorothea (Mrs. Vernon Lassiter) of St. Petersburg, Fla.; Ruth Whittington (Mrs. Roy Grams) of Whittier, Calif.; John Kenneth Pfohl, Jr., of Roswell, Ga.; James Kenneth Pfohl of Reston, Va.; and Donald Lawrence Pfohl, who died on 16 Sept. 1940.