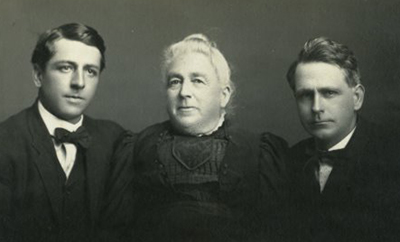 Alice Morgan Person, businesswoman and medicine show performer, was born in Petersburg, Va., the daughter of Samuel and Esther Morgan. In December 1857 she married Joseph Arrington Person and moved to Franklinton, N.C., where he was a prosperous farmer. After he was paralyzed by a stroke in the 1860s, she supported their seven children by making and selling a proprietary medicine, marketed as "Mrs. Joe Person's Remedy." The recipe, she claimed, was given to her mother by an "old Indian" and was "composed entirely of plants growing in the woods around the house." The medicine was said to be effective against a host of ills, among them scrofula, catarrh, rheumatism, cancer, heart disease, colic, and indigestion. It was also billed as an antidote to drunkenness.

After her husband's death in 1883, Mrs. Person "went on the road advertising, selling, drumming, talking." In Raleigh she staged a "public test" at Yarborough House, a downtown hotel, to demonstrate the curative powers of the remedy. She traveled across the state in her horse-drawn rig laden with the cure-all. Her procedure was the same in each county. She would make the county seat her headquarters, hire a double team and "good, reliable white driver," visit every country store, and stop at every house on the wayside with an organ or piano, staying the night wherever she was welcome.

By 1903 the business had outgrown home manufacture and she moved it to Charlotte, establishing a plant with Charles R. Jones as her financial partner. The product, initially marketed only in the Carolinas and Virginia, was in time sold up and down the eastern seaboard and as far west as Texas. According to a promotional circular, the remedy's adherents included former governor W. W. Holden, prominent judges, doctors, and pharmacists. Mrs. Person, on the basis of her popular personal appearances, made several records for the Victor Talking Machine Company in Camden, N.J. In 1898 an eastern North Carolina newspaper called her the "best known woman in the State."

A writer for the Charlotte Observer neatly described Mrs. Person in March 1913: "Her whole air, her quick, positive speech, the straight look of her eyes, the knowing way in which she unconsciously sizes one up, the frank grasp of her chubby hand, even the active movement of a body that is so big it ought to be cumbersome, tell of the independence which has made her career." The reporter was particularly struck by her business acumen, sensing a "strange feeling in talking to Mrs. Person that she is more than two parts man."

Three months later Mrs. Person, just short of age seventy-three, died in Santa Fe, N.Mex., en route to California and Alaska. By faith she was an Episcopalian, though she never identified closely with the church. She was survived by two daughters, Mrs. W. A. Harris of Wake Forest and Miss Josie Person of Hickory, and two sons, W. M. Person of Louisburg and R. M. Person of Charlotte. A sixty-six-page typescript copy of her autobiography, entitled "Banny's Book," is among her papers deposited in the Southern Historical Collection.

"From the attic to the airwaves to the printed page: alumni donation culminates in awardwinning faculty publication." Pirate's chantey : the newsletter of the East Carolina Alumni Association 3, no.1 (winter 2010). 28-29. http://digital.ncdcr.gov/cdm/ref/collection/p249901coll22/id/450558 (accessed April 8, 2013).