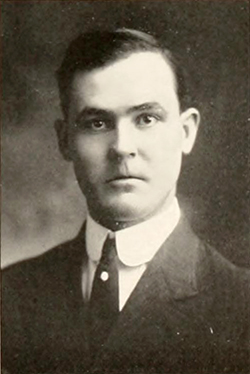 Herbert Dale Pegg, teacher, farmer, and conservationist, was born on the headwaters of Deep River in Guilford County, the eldest son of Jabez Gardner and Ellen Gray Pegg. As a boy he attended Millwood, a one-room district school in Deep River township, and worked on his father's farm, not only acquiring a sound knowledge of the three R's and of agricultural techniques but also developing an abiding interest in fields, forests, and streams. He was a student at Whitsett Institute from 1907 to 1910 and Wake Forest College (now Wake Forest University) from 1910 to 1915. Though he took a law degree in addition to a bachelor's degree at Wake Forest, he was always more interested in teaching and farming than in the practice of law. In fact, he had accepted a position in the North Carolina public school system before leaving Wake Forest and taught in Davie and Madison counties until the United States entered World War I in 1917.

Pegg joined the navy and served as ensign until discharged in the spring of 1919. Returning to the public school system, he was a teacher and principal at Candor High School until 1924. During these five years he also helped with the construction of a new school building at Candor, completed the work for an M.A. degree at The University of North Carolina, and married Mayme Kate Carter, of Moore County, a graduate of the Woman's College in Greensboro, who taught at Candor High.

Though he remained in the public school system for four more years, his interest in field and forest was growing, and he began buying land between the Sandy Ridge and Deep River communities, near where he was born and where most of his forebears had lived over more than two centuries. He wanted to go to the land but was not sure that he should. In the spring of 1928 he decided to return to The University of North Carolina and earn a doctorate in history before making a final decision. That summer, when he and Kate moved to Chapel Hill, he began his studies under R. D. W. Connor and she took a teaching position in the local high school. In 1931, when he had completed work for the Ph.D., the Great Depression was on and good teaching positions were scarce. Pegg built a brick house on his land near the center of Deep River township and settled into the business of growing corn, clover, wheat, soybeans, and melons, and, more important, of enriching his fields and managing his forests and streams. He often said that one of the most important things one could do in this world was to improve some segment, however small, of the physical environment, for life and society would depend increasingly on the products of field, forest, and stream as populations grew, the supplies of oil and coal dwindled, and industrial and nuclear waste accumulated.

Absorbed as he became in farming and conservation, however, his interest in history and the education of young people never waned. During the 1960s Pegg did additional work on his doctoral dissertation and published it in 1969 under the title of The Whig Party in North Carolina. At the same time he and Kate, ever conscious of the financial problems they had faced as students, decided to leave most of their modest properties for a scholarship fund for needy and deserving boys and girls in the predominantly rural areas of nine counties in the central Piedmont. Holders of Herbert Dale Pegg and Mayme Kate Carter Pegg Scholarships may attend either the Chapel Hill or the Greensboro branch of The University of North Carolina. He died in the Wesley Long Hospital in Greensboro and was buried in the cemetery at the Sandy Ridge Methodist Church.

Record of the University of North Carolina: Undergraduate Bulletin (1982).