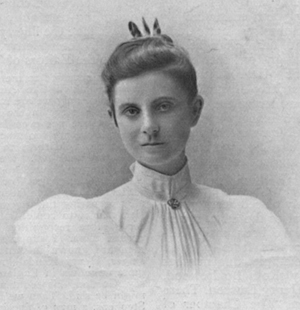 Elia (Maria Cahill) W. Peattie, writer, journalist, and lecturer, was born in Kalamazoo, Mich., the oldest of five daughters of Frederick and Amanda Maria Cahill Wilkerson. She and her four sisters—Kate, Gertrude, Bertha, and Hazel—were ninth-generation Americans. The family early moved to Chicago, where she went to school through the sixth grade, then went to work setting type in her father's print shop. After a six years' courtship, on 10 May 1883 she married Robert Burns Peattie, a newspaperman born in 1857 to immigrant Scottish parents.

Elia Peattie became art and society editor of the Chicago Tribune, then a reporter. From 1888 to 1896 she and her husband were employed by the Omaha World-Herald. Returning to Chicago, Elia was literary critic for the Tribune (1901–17). For many years her husband was associated with the New York Times . About 1899, she first journeyed to Tryon seeking a mild winter climate for her son Donald Culross, whose health was delicate in his boyhood. In spite of frequent and prolonged visits thereafter, often staying with Charles and Emma Payne Erskine, the Peattie family did not settle in Tryon permanently until after World War I. Elia and Robert were active in community life, organized a little theater group, and spearheaded the purchase of Pearson's Falls as a conservation project.

Elia W. Peattie, a tall, commanding woman, lectured and traveled widely. She could, it is said, "fight like an Indian" for causes in which she believed. She published some thirty titles: travel, history, novels, short stories, poetry, drama, and books for young readers. Among the last are Azalea, the Story of a Girl in the Blue Ridge Mountains (1912) and its three sequels, Annie Laurie and Azalea (1913), Azalea at Sunset Gap (1914), and Azalea's Silver Web (1915). The Peatties' four children were Edward Cahill; Barbara Culross (Mrs. Ralph Erskine); Roderick, the well-known geographer; and Donald Culross, the famed naturalist. Elia was an Episcopalian and a Democrat. She died at Westhill, her son Roderick's farm in Vermont, and was buried in Tryon, where on her tombstone are these words: "She ate of life as if 'twere fruit."

Donald Culross Peattie, The Road of a Naturalist (1941)

All of this sounds great but

All of this sounds great but she was not favored by her entire family. Elia was my grandfather's sister-in-law. She spoke unfairly about her father. She was jealous of my great grandmother and her marriage to my great grandfather . Due to my grandfather's up bringing when I asked him directly about Elia he politely said only that she wrote a book or something. To me her attitude shows through in her writing.