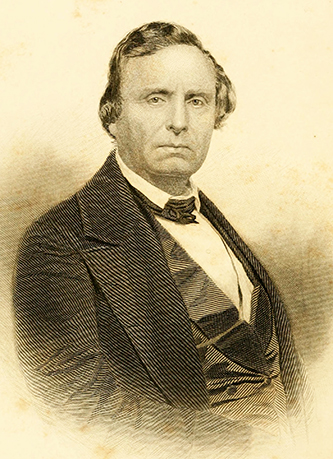 Robert Paine, Methodist Episcopal clergyman, was born in Person County, the son of James Paine, who was educated at The University of North Carolina and served as clerk of the Person County Court, and his wife Nancy A. Williams. James's father, Robert, and his grandfather, Dr. James Paine, of English ancestry, also lived in what is now Person County. In 1814 the family moved to Giles County, Tenn. Although Robert Paine's formal education was limited, he acquired some knowledge of Latin, Greek, Hebrew, and French. In 1817, after a camp meeting experience, he was converted, and on 1 Oct. 1818 he was admitted to the itinerant ministry at the Tennessee Conference of the Methodist Episcopal church at Nashville. In 1821, at Salem, Tenn., he was ordained a deacon by Bishop William McKendree, the first native American Methodist bishop, and in 1823 was ordained an elder by McKendree at Huntsville, Ala. From 1829 to 1846 Paine was president of La Grange College, in northern Alabama, an institution that in 1855 became Florence Wesleyan University at Florence, Ala. In 1845, at Louisville, Ky., he was one of the "founding fathers" of the Methodist Episcopal Church, South.

In 1846, at the General Conference of the Methodist Episcopal Church, South, at Petersburg, Va., Paine and William Capers (1790–1855) were elected bishops on the second ballot. Paine was ordained the sixteenth bishop of the church on 14 May 1846 at Washington Street Church, Petersburg, and his family moved to Aberdeen, Miss. He was a delegate to or presiding officer at conferences (district, annual, or general) in Alabama, Arkansas, Florida, Georgia, Kentucky, Louisiana, Maryland, Mississippi, Missouri, North Carolina (Charlotte and Fayetteville), South Carolina, Tennessee, Texas, Virginia, and West Virginia; he presided over the Indian Territory Conference and the German Mission Conference; and he helped organize the Colored Methodist Episcopal Church in America at Jackson, Tenn., in 1870. In 1849 he had supervised California as a "foreign" mission. In a letter of request for retirement in 1882 he asserted that he had been a member of every General Conference of the church from 1828 to that date. On the eve of the election of Abraham Lincoln, he conferred with President James Buchanan at the White House about conditions in the South.

Paine and several of his episcopal colleagues of the church in the South were "planter-preachers." By 1844 he owned extensive property in Davidson County, Tenn., and Franklin County, Ala. Even before the 1844 General Conference, at which the church split into the Methodist Episcopal church and the Methodist Episcopal Church, South, his views were those of the "Southern Aristocracy." The family occupied a large mansion built in 1847 by Mrs. Paine's uncle in Aberdeen, Miss. (near Matubba and Jefferson Street), a dwelling owned in 1966 by Thomas Fite Paine, a descendant. Paine himself supervised his 3,100-acre plantation and fifty-two slaves. Usually he arranged his episcopal tours in the winter months to permit direct supervision of his farming operations. In 1860 his plantation yielded 5,000 bushels of corn, 310 bales of cotton, 800 bushels of sweet potatoes, and smaller amounts of wheat, rye, oats, and Irish potatoes. In the war years he seldom left Mississippi. The end of the war found Paine's fortunes diminished and the episcopacy reduced to six men; thus, Paine increased his tours of the Southern conferences.

In 1842 Wesleyan University in Middletown, Conn., conferred on him the degree of doctor of divinity; later the University of Nashville awarded him the master of arts degree. Paine was the author of Notes of Life and Life and Times of William McKendree, Bishop of the Methodist Episcopal Church (1869), the latter required reading for ministerial candidates for fifty years in the Methodist Episcopal Church, South. In 1823 Paine married Susanna Beck, daughter of John E. Beck and granddaughter of General James Robertson, Tennessee pioneer; they had two sons, John E. Beck and James S. In 1837 Paine married Amanda Shaw; no children were born to this union. In 1839 he married Mary Eliza Millwater and they had seven children: Robert, John Emory, George W., William, Sarah Felix, Ludie, and Mary. The bishop was interred at Aberdeen, Miss.; portraits of him are in standard Methodist histories.