George Willis Pack, lumber merchant and benefactor of the city of Asheville, was born in Fenner, Madison County, N.Y., of English ancestry. His forebears had settled in New Jersey in 1664 and for generations had been active in political and military affairs there and in New York. His father and grandfather were both named George Pack; his mother was Maria Lathrop of Connecticut. He was educated in the public schools of Peterboro, N.Y., and at age seventeen accompanied his father to Sanilac, Mich., in the midst of a vast forest area. His father's aim was to establish a lumbering business. Young Pack worked for his father for some years, then went into business on his own in 1854. His initiative and knowledge of all phases of forestry and lumbering led to quick success. Over the next thirty years he established a network of profitable firms and resided at various places in Michigan and Ohio. Eventually he settled in Cleveland, using that city as a base of operations for his many enterprises.

Pack first went to Asheville in 1884 and, attracted by the healthy climate of the growing town, chose it as his permanent home. In 1885 construction was completed on Manyoaks, his large mansion, which shortly became one of the showplaces of the mountain city. Soon thereafter he began his program of gifts to the city; over the next twenty years his contributions of land and money would aid many needy causes and provide educational, cultural, and welfare benefits for the people. His benefactions showed great foresight, and many are still evident in Asheville. 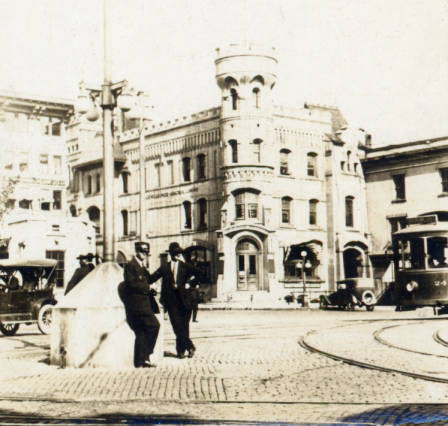 In 1892 Pack established a free kindergarten, donating the complete cost of land, construction, and a teacher's salary. In 1896 he bestowed $2,000 towards the erection of a monument to honor Zebulon B. Vance. In 1899 he purchased land and buildings on the site of Court Square for the Asheville Public Library; the library received both a permanent new home and income from rents on the existing buildings. The next year Pack gave land on College Street with the stipulation that the existing Buncombe County Courthouse be torn down and a new one constructed. The remaining land was to be made into a public square. In gratitude, local officials changed the library's name to Pack Memorial Public Library and the previous Court Square to Pack Square; both sites still bear his name.

Among his other contributions to the civic betterment of Asheville were funds to aid hospitals, the YMCA, orphans and widows, and veterans' organizations. He also deeded land for three city parks. These gifts were bestowed in his characteristically quiet manner, often by means of a brief note to city officials. They were always timely and of an enduring value, so that though an outsider he held a high place in Asheville hearts. The Asheville Citizen commented typically on 2 Jan. 1901: "We salute George W. Pack! If heaven has vouchsafed to any community a better citizen, the fame of him has not reached these parts."

In failing health, he spent his last days by the sea at Southhampton, Long Island. At the news of his death, Asheville observed a day of public mourning, with many offices closed and their doors draped in black. A representative from the city attended his funeral and burial in Cleveland, Ohio, on 4 Sept. 1906.

A Presbyterian, Pack married Frances Farnam of Milwaukee in 1854. The couple had three children: Charles L., a nationally known forester and conservationist, Mary, and Beulah. Two portraits are on view in Asheville, one at the Buncombe County Courthouse and one in Pack Memorial Public Library.